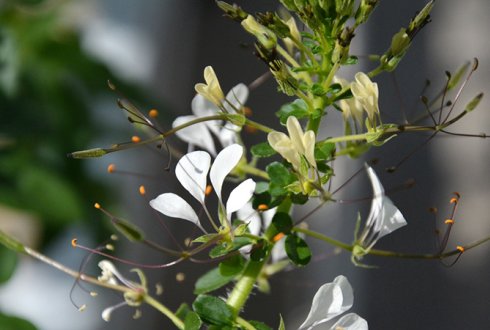 In the Netherlands, the best known member of the plant family Cleomaceae (related to cabbage) is the ornamental ‘spider plant’, Cleome hassleriana. However, in large parts of Africa and Asia, Cleome gynandra is a popular food plant. For Wageningen Professor in Biosystematics Eric Schranz, cleome is also an ideal research tool for studying the evolution of photosynthesis and helping find solutions to the global food issue.

Cleome gynandra is a popular vegetable in countries Sub-Saharan Africa and in Asia. “But it is mainly a vegetable grown for home use,” says Schranz. “You could see it as a kind of vegetable garden plant. The leaves of the plant are nutritious, with relatively high levels of vitamin C.  Although the plant has yet to be the subject of much research as it is mainly grown for home use, there is much to learn from Cleome gynandra and possibilities for breeding.”

One of the reasons why Schranz started studying the cleome involves photosynthesis. “Cleome gynandra is a so-called C4 plant, like maize and various grass varieties. C4 plants use a different method for photosynthesis, making them better suited to drought and conditions with high levels of sunlight and evaporation than other plants. This C4 photosynthesis developed individually in over 60 plant lines, making it an important development in terms of evolution. Cleome is a good organism with which to gain more insight into this evolution.”

In addition to these fundamental issues, Schranz’ group is also working on an applied line of research. “In Africa, cleome is a so-called ‘orphan crop’ in terms of scientific research, which means it is rarely used for research. With the support of the Mars Foundation and NWO, among others, we are now focusing extra research on C4 plants like cleome. Gaining better insights into C4 photosynthesis and its resistance to drought and heat, then possibly building it into other crops, has the potential to significantly increase the yield of agricultural crops.”