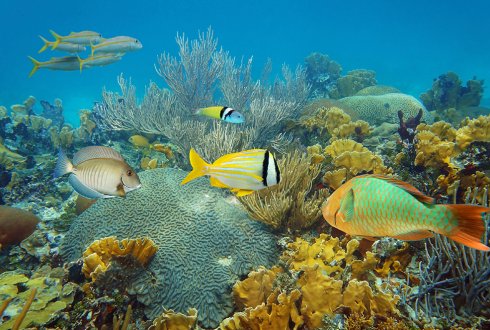 Wageningen University & Research is to partner with the Council of International Education and Exchange to build a small-scale algae pilot on the isle of Bonaire where the university will study how algae production can best be realised. This represents an interesting business case for the island with challenging production conditions.

Algae are a virtually untapped resource of oil and protein, one which can be used to extract a variety of useful components and cultivated without competing with agriculture. This is why various parties have a keen interest in the Wageningen AlgaePARC, which aims to optimise algae cultivation. With an €800,000 subsidy from NWO, granted in early December 2016, the AlgaePARC will now extend its research to Bonaire.

“Several things are coming together,” says professor René Wijffels. “We have had contacts on Bonaire for some time. While the island currently depends almost entirely on tourism, it is aiming for a more diverse economy. Bonaire is interesting for us as a research location because it offers ideal production conditions. Travel agency TUI is also participating in the research based on its interest in bio-kerosene, a potential way to increase the sustainability of its core business.”

There are countless applications for algae, and commercial algae companies are already making products such as components for cosmetics on a small scale. Due to the relatively high production costs, however, many end products are currently not an option. “One can easily use algae to produce kerosene but it is not yet competitive,” Wijffels acknowledges. In the medium term, he does see potential for algae as a replacement for soy oil, soy protein or fishmeal. “There is significant demand for these products. Fishmeal is used as fish feed in salmon farms, for example, but is currently being produced from wild caught fish – which is clearly not very sustainable.” The AlgaePARC in Wageningen can develop a production line with algae which are cultivated in such a way that they offer an alternative to the current fish feed. The facilities on Bonaire will study how this could be upscaled at limited costs.”

A major challenge in algae production involves making the algae grow as efficiently as possible based on the sunlight to which they are exposed. In the lab, scientists have managed to use algae to convert 6.5 per cent of the added solar energy into chemical energy. In the outdoor test facilities in Wageningen the yield is stuck at 3.5 per cent, however, as the conditions in the Netherlands are far from favourable. This is where Bonaire comes in.

“Bonaire offers a constant temperature and lots of sun,” Wijffels explains. “A downside is that the culture tubes can become as hot as 50 degrees, which would kill the algae. But we want to see whether we can regulate the temperature by constructing floating production units that are cooled by seawater.”

Wijffels sees a double-edged sword scenario. “The research facility on Bonaire is a business case for the island. And there are many islands like Bonaire: with a major dependence on the tourism industry and little production. This makes the local economy vulnerable. Algae production could diversify the economy on the island. On the other hand, if we find answers to the more practical issues related to algae production on Bonaire, we could also produce algae closer to home.” Wijffels expects algae to be a commercially attractive alternative to soy or fishmeal within the next five years. “The business case for kerosene demands more time, as conventional kerosene is still very cheap. But I believe that when we start fractionating algae into various useable components via biorefinery, bio-kerosene will become a realistic possibility as a by-product of fish feed.”