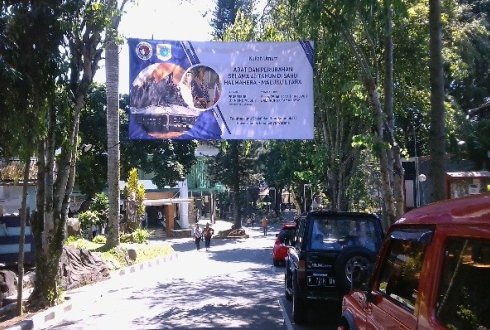 In July 2019, the book Sejarah Pertanian dan Kebudayaan Sahu di Halmahera by emeritus Professor Leontine E. Visser (SDC) was launched at an international congress of anthropologists in Yogyakarta, Indonesia. The book covers 40 years of regional development on the island of Halmahera in the North Moluccas.

The book is based on Leontine Visser's long-sold-out book on "dry agriculture" of rice (1989) and supplemented with information on developments since the 1990s. For the translation from English, Leontine worked with Drs. Sunu Widjayengrono, lecturer at the University of Ternate. He was hired for this by the Faculty in 2018 with a grant from SDC on a short contract.

From July 22-29, Leontine gave a series of lectures at the Universitas Gadjah Mada (UGM) in Yogyakarta and Universitas Satya Wacana (UKSW) in Salatiga, both on Java. There was a lot of interest, especially from staff and students from Eastern Indonesia, in particular the island of Halmahera (half the size of the Netherlands). On that occasion, beautiful posters were made and a regional welcome dance was performed.

Since her retirement at the end of 2012, Leontine has worked as an "additional researcher" at the National Museum of World Cultures in Leiden. Under the title "Halmahera Project" she has brought together more than 1000 photos, 90 minutes of color film, various explanatory texts and her publications on her research in the Sahu district of Halmahera since 1980. This research data is on the public museum website. In this way, it contributes to the "Dialogue, an academic responsibility" (theme Opening Academic Year 2019).