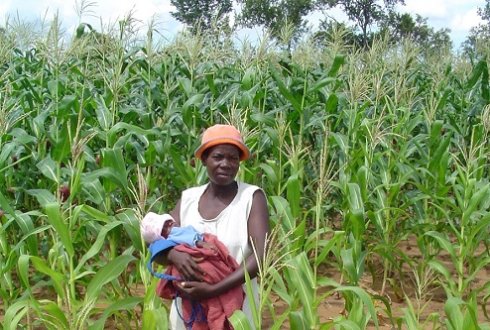 In 2050, when the population of Africa is two and a half times larger than now, the continent will scarcely be able to grow enough food for its own population. Even if much higher yields are achieved on all current cropland, further expansion into uncultivated areas is likely and very risky due to biodiversity loss and increased greenhouse gas emissions. Based on local data and model calculations, this was the conclusion of a study conducted by a team of researchers from Wageningen University & Research, several African institutes and the University of Nebraska. Their findings were published in the journal PNAS of this week.

Agricultural yields per hectare in sub-Saharan Africa are currently low. For example, the maize yield is only 20% of the potential yield with good management. In comparison, the yield in the Netherlands or USA is 80% of the potential yield. Although extensive farming now satisfies most of the African population's demand for grain, in the next few decades the African population will grow by a factor of 2.6 and grain demands even 3.4 times. Therefore in 2050  self-sufficiency on existing farm land is only feasible if the yield per hectare will rise to 80% of the potential, just as in the Netherlands or the United States.

During the past decade, the maize yield per hectare was less than 2 tonnes, with a very small annual increase (approximately 30 kg per hectare). In 2050, the yield must be approximately 7 tonnes per hectare. As a result, an annual increase in yield per hectare of 130 kg must be achieved – starting now. “In addition, there are still possibilities to grow multiple crops per year and to expand the irrigated area, but these are options with many uncertainties,” emphasises principal investigator Martin van Ittersum of Wageningen University & Research.

If that fails, then major expansions of farmland are required, which will be at the cost of natural habitats and increased greenhouse gas emissions, or enormous grain imports that must be paid with scarce foreign exchange. In some countries, the required area is simply not available, and expansion of farmland is not sustainable, explains one of the researchers, Professor Abdullahi Bala from Nigeria. Van Ittersum: “You still hear people say that Africa can become a major grain basket of the world, but it may be very challenging for Africa to remain even self-sufficient in the future.”

Modernisation of agriculture in Africa

Consequently, according to the international research team including Kindie Tesfaye from the International Maize and Wheat Improvement Centre (CIMMYT) in Ethiopia, a rapid intensification of African farming is required. He sees options that will lead to improved yields, such as grain varieties that are adapted to local conditions, and improved fertilisation and control of diseases and pests, including parasitic plants. Tesfaye also stresses the importance of improved farming with multiple crops per year and the expansion of sustainable irrigation. Van Ittersum adds: “As a result, large investments are required in research and development, in the private and public sectors, to increase production while limiting environmental impact.”

Although the researchers restricted their study to biophysical limits and possibilities, they also call for attention to market access, especially for smallholder farmers, and to transport, infrastructure, farm loans and insurance. As a successful example, co-researcher Professor Bala of the Federal University of Technology, Minna refers to a policy that is linked to the private sector, which has been used successfully to improve rice yields and cropping intensity in Nigeria.

The researchers from Wageningen University & Research, and their colleagues from African research institutes and the University of Nebraska, collected data from 10 African countries which accommodate 54% of the total population of sub-Saharan Africa and which contain 58% of the total cropland on this part of the continent. They mapped out the production and demand for five major grains – maize, millet, rice, sorghum and wheat – in Burkina Faso, Ghana, Mali, Niger, Nigeria, Ethiopia, Kenya, Tanzania, Uganda and Zambia. They consider it unlikely that the situation is more favourable in other African countries because there the availability of arable land per capita is slightly lower.

The research was supported by the Bill & Melinda Gates Foundation as part of the Global Yield Gap Atlas, a project that is jointly led by Wageningen University & Research and the University of Nebraska at Lincoln in the United States.

Photo made by Ken Giller