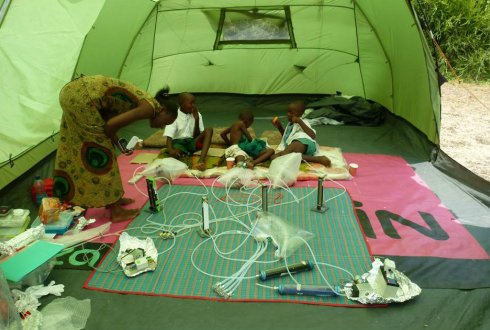 Malaria parasites in the body of children with malaria enhance the production of some specific smells that are emitted through the skin. These smells attract additional malaria mosquitoes, increasing the risk that these children are bitten. An international team led by researchers of Wageningen University & Research unraveled which specific smells are at stake. They publish their data today in the authoritative journal PNAS.

The scientists noticed in earlier research that children who carry the malaria parasite, Plasmodium, are more attractive to malaria mosquitoes than healthy children. The Wageningen scientists from the Laboratory of Entomology, together with researchers in Great Britain, Kenya and Nijmegen, The Netherlands are continuing their search for the mechanism of this increased attraction. They examined the amounts and identity of the odours that children emit once infected with the malaria parasite by the bite of a mosquito.

Their research now shows that the amount of some specific odour compounds in children infected with malaria is much higher than in malaria-free children. The researchers were able to precisely determine the nature and concentrations of these compounds. Heptanal, octanal and nonanal, which are known as aldehydes in chemistry , are found to be emitted at higher levels by children with malaria. "These are fairly common smells, which are described as fruity or grassy. But for malaria mosquitoes they are very attractive," says Wageningen researcher Jetske de Boer. The proportion of aldehydes appears to increase from about 15% of the total odour bouquet to almost 23%. Furthermore, the researchers saw that the higher the density of parasites in the blood, the more of the three aldehydes are emitted.

The new findings provide additional opportunities to combat malaria. "Now that we have identified and quantified the aldehydes associated with malaria infection, we understand more of the parasite's infection route. That also creates opportunities to intervene in that chain. We can improve our odour-baited traps for mosquitoes by adding a considerable amount of these attractants," says researcher Jetske de Boer, who led the research in Kenya. "Moreover, these compounds can serve as biomarkers with which diagnostic tools can be developed, without the physician having to draw blood. Faster and a lot more child-friendly."

To perform the measurements, the research team in Western Kenya collected odour samples from 56 children between 5 and 12 years old. A special plastic bag was placed around the foot of each child, and air was blown through the bag for three hours. The foot odour collected on a filter was analysed by British researcher Ailie Robinson of the London School of Hygiene and Tropical Medicine. She also studied whether the antenna, the 'nose' of the mosquito, responds differently to the collected odours of children with and without malaria. Using nylon socks worn by the children for one night, it was shown that the body odour of children with malaria is indeed more attractive to mosquitoes than the odours of malaria-free children.