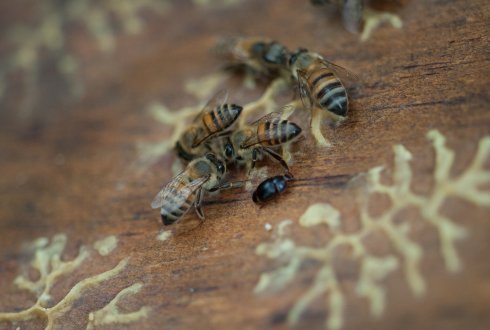 New research has found that if climate change continues on its current path, it's likely that our honey bee will be facing a new threat sometime in the future. This is because an increase in temperatures will provide the perfect conditions for the small hive beetle, an invasive species capable of rapidly destroying a bee colony.

These findings are the result of research carried out by an international team led by Bram Cornelissen (Wageningen University & Research). The scientists researched the risk of an invasion of the small hive beetle under a number of different climate scenarios between now and 2080. Their work was recently published in Global Change Biology.

Spread of the small hive beetle

The small hive beetle is endemic to sub-Saharan Africa, but over the past 30 years it has managed to spread across almost the entire world. This is partly due to the international market for wax, honey and bee colonies. In 2014, the beetle was identified in Italy, where it had managed to establish a population. The beetle has a devastating impact on bee colonies. Once established, small hive beetles rapidly reproduce and their larvae can decimate a bee colony within two weeks.

“Invasive species regularly turn up in the Netherlands and cause significant damage to our environment and to agriculture,” says Bram Cornelissen, who participated in the research into the spread of the beetle. “Climate change could make this an even greater problem than it currently is. The appearance of the small hive beetle would be a new challenge for beekeepers in the Netherlands. This is a cause for concern, and if we don’t take action now to prevent the introduction of this beetle, we will eventually find ourselves paying the price. If beekeepers adopt new practices now to mitigate against this threat, they will be making a significant investment in their future.”

Using a model which drew on existing research and satellite data, the researchers identified the ideal soil temperature and moisture preferred by the beetles.

“The small hive beetle pupates in the ground,” says Cornelissen. “When they’re among a bee colony they’re protected from climate and weather conditions, but that’s not the case during pupation. We therefore researched the impact of soil temperature and moisture on pupation success and duration. We did this by analysing and combining previously published data and our own experimental data.”

The research revealed that as temperatures rise in large parts of the northern hemisphere – including the Netherlands – conditions will become increasingly conducive to the pupation and establishment of the small hive beetle. Furthermore, if soil temperatures increase, the beetle may be able to go through more reproductive cycles in a year, increasing the impact. But should the beetle arrive here right now, it’s uncertain as to whether it would be able to successfully establish itself and survive.

More about the Small Hive Beetle: