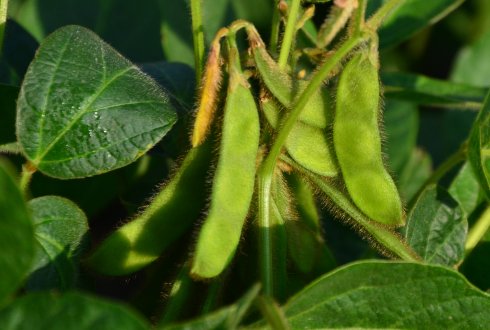 European consumers are not keen on genetically modified soya, or on soybeans grown in former rainforest areas. However, a growing group of pioneers has shown it is also possible to grow soya in the Netherlands. ‘We’d like more pioneers to join us and we’re also actively seeking new varieties with higher yields and earlier ripening’, says Wageningen UR researcher in Lelystad Ruud Timmer.

Three tonnes of soya per hectare in the Netherlands

At the end of November, a Dutch ‘Soya Day’ was organised for the second time, together with the agricultural cooperative Agrifirm. ‘Last year there were only ten Dutch soya growers; this year, 35!’, an enthusiastic Ruud Timmer reports. ‘They are still very much the pioneers. At the moment we can just manage to produce three tonnes of soya per hectare in the Netherlands. That’s comparable with the yield in, for example, Brazil, but you have to remember that the land there is much cheaper. So, the Dutch growers still need to make this a commercial proposition.'

The Soya Days still mainly centre around dealing with teething troubles, Timmer says. ‘For example, last year the focus was on ways of inoculating seed with Rhizobium bacteria, necessary for the absorption of enough nitrogen via the root nodules. Initially, inoculation was sometimes done by mixing the seed with bacterial culture in a concrete mixer! Now, Agrifirm has discovered an efficient method of coating seed with Rhizobium. That saves the growers a huge amount of work and inoculation is more likely to be successful.’

This year the practical discussions focussed more on new varieties that ripen earlier, Timmer noticed. The first of the varieties – on the Dutch market for three years – do not ripen until early October. Varieties that are already harvestable in September would be more preferable. That means a shorter growing season, but the yields also need to increase. The business is profitable once you can harvest more than 3.5 tonnes from a single hectare. We have contacted German and Belgian colleagues in our search for new varieties as they are also working on the development of soya cultivation.’

Dutch soya is mainly sold to food producers at the moment. ‘That market segment pays more for soya, which is more interesting for Dutch growers. European consumers prefer not to have genetically modified soya on their plate or in their glass. In animal feed production, it is not yet possible to replace South American soya with Dutch soya, but that may well be on the cards in the future. However, we need to remain realistic. If all the soya for animal feed was to come from Europe, you would have to plant half the continent with soya, as it were. At the same time, we’re already seeing that organic dairy and poultry farmers are mixing organic ‘Nethersoya’ into their feed. It seems it’s really difficult and expensive to find sufficient organically grown and guaranteed GMO-free protein crops.’

Dutch climate is favourable for the future of soya

Timmer believes the Dutch climate is not a problem for the future of soya and other protein crops in the Netherlands. ‘Just think, it used to be impossible to grow maize north of France. And we now even have vineyards in the Netherlands, so why can’t we optimise soya cultivation? What we’re looking for are interested growers and, in particular, breeding firms that can help us achieve earlier ripening and greater yields.’