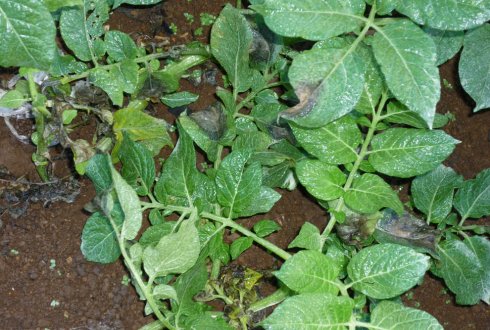 Wageningen University & Research uses computer models to develop sustainable management strategies in the control of potato late blight, caused by Phytophthora infestans. Francine Pacilly will receive her PhD on this socially relevant topic on September 4. Her research provides important insights for farmers, breeders, potato traders, retailers and governments. Resistant varieties can play an important role in sustainable disease control, but cooperation between stakeholders in the whole potato sector is required.

The impact of late blight

Potato production, which is very important for the Dutch economy, has long been threatened by the aggressive disease. This has major consequences for trade but also for national and international consumption. Moreover, fungicides which are used in disease control have a negative effect on the environment.

At the moment, large amounts of fungicides are used to control the disease. Organic farmers face an additional challenge because they are not allowed to use these chemicals. From an environmental point of view, these chemicals are also very polluting and therefore sustainable late blight management strategies are needed.

What is needed for the future

In Francine Pacilly's PhD research, computer models have been used to investigate how the disease spreads in an agricultural landscape and to analyze the effect of growing resistant varieties. These models show that an increase in the number of potato fields with resistant varieties increases the risk that aggressive strains of the pathogen emerge and spread. This risk decreases if more than 50% of the acreage of potato fields consists of resistant varieties. So many resistant potatoes are not yet available so alertness is required. Various strategies are available to limit the consequences of a breakthrough, for example the spatial allocation of crops in combination with the use of small amounts of fungicides to limit the environmental impact. In addition, growing resistant varieties with multiple resistance genes reduces the risk of susceptibility to the potato disease. It is expected that these type of varieties will enter the market soon.

Last year workshops with farmers were organized to increase awareness about the risk of resistance breakdown. In these workshops, the computer model was used to present several model scenarios to conventional and organic farmers. These workshops were very useful for showing farmers how the disease spreads in a landscape over time and space and for showing the effects in the long term. After the workshop farmers agreed that resistance management is important to increase the durability of resistant varieties and that collaborative action is needed. The workshops were useful to bring farmers together and to discuss strategies in the control of late blight to reduce the impact of the disease.

In order to develop sustainable strategies it is important to consider all factors that influence late blight control such as the disease, the crop and control strategies of farmers. This research is part of the Complex Adaptive Systems program of Wageningen University where the goal is to identify these factors and to analyze how they influence each other. Potato late blight as one system brings a future without chemical control closer.