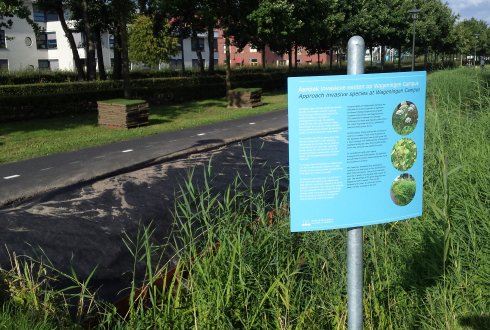 In consultation with green area management and WUR researcher Chris van Dijk, an approach has been developed to reduce and control these species on campus as much as possible without the use of biocides. In some places Japanese knotweed will shortly be dug up and young giant hogweed plants cut down below the growing point. Warning signs will be placed at locations where there is a lot of giant hogweed.

Giant hogweed (Hieracleum mantegazzianum) is a plant with huge white umbels, which was introduced from Asia in the 19th century as a garden plant. Currently the dried umbels are still used as decoration. Giant hogweed is very similar to the native common hogweed (Heracleum sphondylium), but it is a lot bigger. It can grow to a height of 4 metres. The sap from the plant can cause blisters.

The approach to giant hogweed aims at eradication due to the health risks. Since 2016 it has also been required by law to control giant hogweed (implementation of EU regulation on invasive alien species). This means that the plant must not be allowed to flower. With current methods that involve cutting down or removing the flower heads, this is not possible. If just one plant is missed, it can soon produce 10-20,000 seeds!

On the campus it has therefore been decided to cut off the plants (by hand) below the growing point and to dispose of the cuts parts safely. This is done several times a year, as the plants keep on germinating throughout the whole season. Slowly but surely, plant numbers will reduce, but it will take a few seasons. Even after this period the area should be monitored, as there is a huge seed stock in the soil.

Japanese knotweed (Fallopia japonica) was introduced in the same period as giant hogweed. The problem is that the plant has strong, fast and deep-growing roots that can cause damage to roads and buildings. In nature areas it suppresses the native flora. The plant does not spread by seeds, but new plants grow easily from small pieces of root or plant parts when they come into contact with soil. Movement of soil or cut plant parts is therefore a major cause of spreading.

Japanese knotweed can never be eradicated completely. Currently the most effective method to slow down its expansion and prevent distribution is cutting, removal and destruction 2 times per season. As on campus two locations will be targeted, it has been decided to adopt a more rigorous method in an attempt to control the plant for a longer period.

Along the side of the ditch on the Droevendaalsesteeg, at Radix, the top layer will be dug up, removed and destroyed. Thick plastic will be placed on the bare soil; this plastic will then be covered with clay and grass sown. The area will be fenced off to stop people walking on it and the layer slipping away. A similar method will be used further on in the direction of Atlas, around a Liquidambar on a small hill that is contaminated with Japanese knotweed. Here, however, the soil will be covered with a canvas that allows water through, so that the memorial tree can survive the treatment. The canvas will remain in place for a minimum of 4 to 5 years.