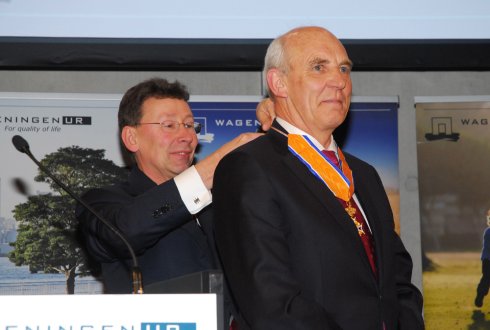 Cornielje recalled how the university and DLO – which merged into Wageningen UR just before Dijkhuizen’s appointment as chair of the Executive Board – flourished during Dijkhuizen’s twelve-year tenure as chair. “Partly through your enormous drive, Wageningen is now a trendsetter and is an example to the world of how a modern knowledge institution should look”, The King’s Commissioner said. He also praised Dijkhuizen for his tireless efforts to put the agrifood sector, both foreign and domestic, on the map; from the Food Valley to the Chinese province of Fujian, where Dijkhuizen is an honorary citizen and advisor to the governor.

Dijkhuizen was also made ambassador for Agri&Food Top Sector

During the assembly on 13 February in Orion, Henk Kamp, Minister of Economic Affairs, also announced that Dijkhuizen will be the new ambassador of the Agri&Food Top Sector, one of the nine top sectors of the Dutch economy. Kamp: “After the United States, the Netherlands is the biggest exporter of agricultural products in the world. This has everything to do with the excellent collaboration between entrepreneurs, educational institutions and the government. Dijkhuizen has devoted the past three years to putting the Agri&Food Top Sector on the map. I am glad that he will continue to devote his knowledge and experience as the ambassador for this sector.”

Kamp described Dijkhuizen as a role model for fruitful cooperation between education, the business community and the government”, and as “the one who put Wageningen UR on the map as a global leader in the field of healthy nutrition, food production and living environment.”

Working together in the Golden Triangle

For his farewell assembly, Dijkhuizen had chosen a very relevant theme: ‘Working together in the Golden Triangle’ (business community, government and knowledge institutions).