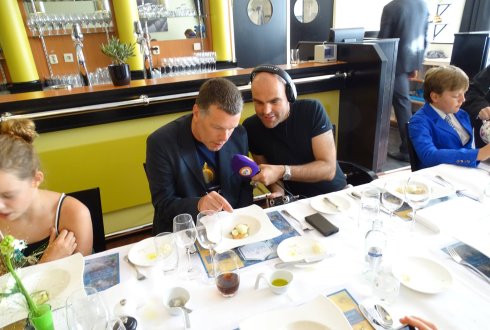 A lovely dinner from ‘Mars’. The first meal ever based on vegetables grown in Mars and moon simulant soils provided by NASA was prepared and heartily consumed on Tuesday the 30th of August. Students of Rijn IJssel Vakschool and Wageningen University prepared the meal and served it to guests at the hotel ‘De Nieuwe Wereld’ (The New World).

The dinner was specially organised for the people who donated to the project ‘Food for Mars and Moon’. They clearly enjoyed the Michelin star-worthy dinner they received, prepared under the supervision of lecturer and chief-cook Jaap Harm van Seggeren. Wieger Wamelink, principal investigator who together with his team grew the vegetables for the meal, was impressed by both the taste and the presentation of the four courses. ‘The sweet taste of the carrots and the tomatoes which were part of several courses was particularly striking. The ice cream made of carrots was brilliant and the potato soup with stinging nettle tasted very good’, according Wamelink, ‘I would give the meal four out of three possible stars’!

Grown in a greenhouse in Wageningen

The vegetables, fruit (tomato) and potato have been grown in Mars and moon soil simulant and earth potting soil (the latter as control), during the past month in one of the greenhouses of Wageningen University & Research. It was the third experiment that we have conducted, this time with the major goal of reaching a high yield of the ten crops: green bean, radish, rocket (rucola), garden cress, spinach, pea, rye, carrot, tomato and potato. This explains why we mixed compost with the soils. ‘This was to simulate the digging-in of dead plant material from a previous harvest’ says Wamelink. Besides that a nutrient solution was added to the pots. ‘To imitate the addition of the poop and pee of the future Mars and moon inhabitants’ explains the researcher. ‘This is important since nothing can be lost or wasted over there, especially nutrients for plant growth. Manure is manure, even when it originates from humans.’ The harvest was so large that it was easily possible to serve a full, vegetarian, meal.

The actual Mars and moon soils, as well as the simulants used here, contain heavy metals such as lead, mercury and chromium. To make sure that they do not end up in the food and thus in the consumers, the astronauts, they were first tested for tomato, radish, pea and rye. Wamelink: ‘happily the contents were very low and far below the maximum allowable dose, so the vegetables can be eaten safely’.

Was all well then?

‘No’, Wieger Wamelink admitted, ‘the potatoes were partly disappointing. This was already clear during the growing period. The potatoes formed new shoots halfway through their season, which is always a bad sign. The potatoes themselves showed regrowth, which impacts on the quality of the potato and the taste. This could be partly an effect of growing potatoes in the greenhouse’. These potatoes were immediately removed by the chef-cook and were not used for the meal. ‘Very bad for the taste’, according Jaap Harm van Seggeren. And though they tasted great, the carrots were a bit small, showing that they probably need a bigger pot to grow in. On the contrary many kilos of green beans and tomatoes were harvested. Especially the tomatoes, which therefore appeared in several courses. The guests however did not agree on what tasted the best: a tomato grown on Mars or moon soil simulant or just earth potting soil. Many said that the taste of the ‘Martian’ vegetables was more intense. Mars food with a bite!

For pictures, continue to the Facbook page: Food for Mars.

Also, check the Crowdfunding page: Can we safely eat plants grown on Mars?