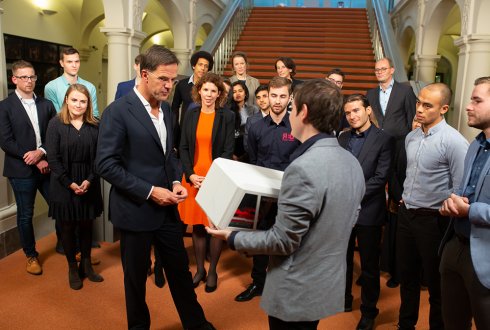 ECSens has won the 4TU Impact Challenge. The start-up from the University of Twente designs sensitive sensors for a faster diagnosis of cancer. This year, for the first time, the technical universities in the Netherlands have organized a joint innovation competition where students can showcase their groundbreaking solutions to societal challenges. The winner will go on a trade mission to the World Expo in Dubai, together with representatives of the Ministry of Foreign Affairs and a number of companies.

“It’s a once-in-a-lifetime chance that we had to take,” says Pepijn Beekman, PhD candidate at both the universities of Twente and Wageningen, in response to his company’s victory which he founded together with Dilu Mathew. “It’s great that our innovation is a success.” His aim with this start-up is to ensure that every patient can be given personalized treatment. A major elimination round preceded the final in the Zuiderstrand Theater in The Hague. The technical universities in Eindhoven, Delft, Twente and Wageningen each organized their own preliminary rounds last spring. A total of around 1000 students took part in the competitions, 80 teams per university. In the end, sixteen finalists made it through to the 4TU Impact Challenge.

Impact on our daily lives

One of the reasons why the independent jury chose ECSens was because their product solves a major societal problem. It has the potential to have an impact on the lives of many people. Nevertheless, jury chair Ester van Someren, deputy general of the Dutch consulate in Dubai, admitted that it was a tough decision.

Each of the teams have brilliant solutions for societal problems. From more efficient healthcare with eye tests at home, to the smart repair of coral reefs. The food industry and the need to eat less animal proteins are also popular themes. As an example, students researched the substitution of meat with insects as a way to have sufficient protein intake. Other teams developed more practical products with a clear goal. Such as a tool for recognizing PTSD symptoms with aid workers and care providers early on. This would mean that employers, for instance, could offer professional help at an earlier stage. Or a toy train that grows along with children as it teaches them programming in a playful way.

A few months ago, the students received pitch training so that they could present their story in a clear and concise manner. “The students had demonstrated in the preliminary rounds that their idea has technical potential. But transferring that idea onto an audience is a profession in its own right,” Pitch Academy trainer Nathalie Mangelaars told at the time. “To do that, students need to step out of their comfort zone.” The students learned to pitch in three different ways: for journalists, politicians and the general public during the final. At the end of the training, students stated that explaining the idea in a simple way is important but certainly not an easy task.

Prior to the challenge, a number of students presented their ideas, and handed over an innovation box, to Prime Minister Mark Rutte at the Binnenhof. “Rutte was open to our ideas and asked several questions,” says Beekman. Now there is hope among the technical universities that the Dutch government will actually invest more in innovation. According to Robert-Jan Smits, President of the Executive Board at TU/e, this is not enough. He thinks it would be a good move if, for example, the government were to support start-ups through incubation programs.

“We want to remain at the forefront of innovation and technological development in the Netherlands,” says Victor van der Chijs, former Chairman of the 4TU collaboration. “It is essential to continue to invest in young talent and the innovations they come up with. The social importance of this is tremendous. Moreover, companies are eager to get in touch with young talent who are able to shape the future and who can work well together.”

Four teams from Wageningen participated in the 4TU Impact Challenge. Edgar Suarez from ALFI is developing a technology to extract protein from micro algae, which can, for example, replace eggs in a pie. Team ENAKKE made various seasonings, based on insects, that can be sprinkled over the meal. Team InsectImpact developed baking kits for brownies based on ground insects and Team Morama developed food products based on the protein-rich morama bean, a crop that is resistant to the extreme drought in Africa.

WUR supports the teams via Starthub, Startlife and WUR Student Challenges. Through these communities, student teams, start-ups and companies can meet and collaborate on innovative solutions to social problems.

Cooperation between universities of technology

The Dutch 4TU Impact Challenge is part of a wider collaboration between the Netherlands’ four universities of technology. The universities join forces to make the best possible use of knowledge and creativity in the technology sector. These efforts span the field of education, research and commercial knowledge transfer. The students channel the knowledge they gain back into society in the form of innovations and start-ups. Their products and services make a valuable contribution to solving society’s problems.