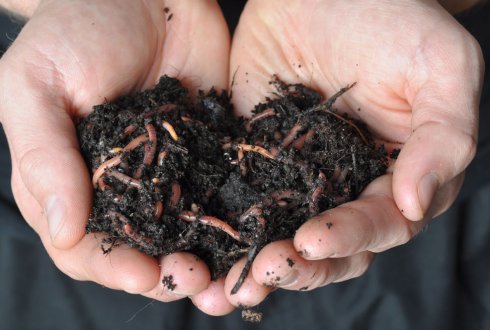 Earthworm presence in the soil increases crop yield, shows a new study that was published this week in Scientific Reports. "This is not unexpected", says Jan Willem van Groenigen, associate professor in the Soil Biology group of Wageningen University, and lead author of the study. "People have known for millennia that earthworms can be good for plant growth. However, we did not know how strong this effect is, nor how it works. That is what we studied."

Van Groenigen and his MSc student Hannah Vos, co-author of the study, gathered all published articles to date on this topic: 58 different studies, the oldest one dating from 1910. All experiments measured the effect of earthworms on crop yield and plant biomass. Subsequently, Ingrid Lubbers, postdoctoral researcher in the Soil Biology group and co-author of the study, was able to discern patterns in the large amount of data, using a statistical technique called meta-analysis.

The overall outcome of the study was very clear: "On average, earthworm presence increases crop yield by 25% and aboveground biomass by 23%" says Ingrid Lubbers. "We also found that earthworms did not change the nitrogen content of plants, indicating that crop quality was unaffected. Earthworms therefore have a strongly positive effect on crop production".

The research team, which also included scientists from Northern Arizona University in the United States and Embrapa Forestry in Brazil, looked further into the underlying mechanisms of the earthworm effect. The positive effect disappeared when nitrogen fertilizer was applied, or when legumes (which can fix nitrogen from the air) were present. "This suggests that earthworms boost crop yield by increasing the amount of nitrogen that is available to plants", says Kees Jan van Groenigen, postdoctoral researcher at Northern Arizona University and co-author of the study. Nitrogen is one of the most important nutrients that plants need to grow. "Through their burrowing and feeding, earthworms release nitrogen that is otherwise locked away in soil organic matter or plant residue".

Does this mean that, through earthworms, nature provides us with free nitrogen fertilizer? "Unfortunately, no" Ingrid Lubbers continued. "Earthworms do not create nitrogen, they can just aid in making it available. The positive effect is strongest when you apply large amounts of plant residue that earthworms can feed on. If you don't do that, you have to accept a loss of soil organic matter to release nitrogen". The authors therefore conclude that earthworms are especially important to two types of farmers: those who can't use mineral nitrogen fertilizer because they don't have access to it, and those who won't use nitrogen fertilizers because they rely on decomposition to provide nutrients, e.g. in organic farming systems. In intensively managed, highly fertilized agricultural systems the beneficial effect of earthworms is likely to be small.

Yet, there are still many questions unanswered, Jan Willem van Groenigen emphasizes: "We noticed a paradox: earthworms have the largest beneficial effects on plant growth in the poor, unfertile soils where they are least likely to survive. Future studies should therefore focus on how to improve earthworm populations in these soils. Also, it is not yet clear from the articles that we studied how much earthworms also affect the availability of other nutrients, especially Phosphorus. Eventually, we will have to know this in order to understand how earthworms can help us in building a more sustainable agriculture".