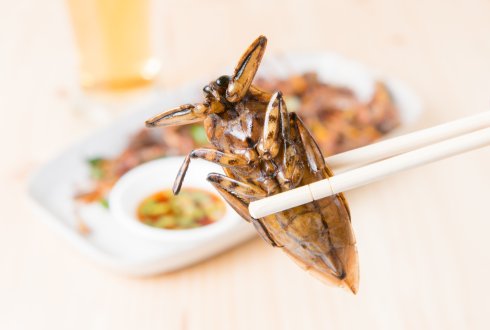 Meat consumption has risen sharply in recent decades, resulting in a large contribution of the livestock sector to CO2 emissions. Although beans, seaweed and insects are valuable alternative sources of protein, when it comes to consumers accepting insects – processed or otherwise – we still have a long way to go in the Western World. 'People don’t want to, or they find it disgusting,' says researcher Muriel Verain. 'It also makes almost no difference whether it’s whole or processed insects.'

Muriel Verain conducted research into the opportunities for eating beans, seaweed and insects, revealing that eating insects is still very much at the outset. 'If you are going to eat insects, these are usually mealworms, locusts and crickets. You can also look at insects as feed for animals, for instance; but this would concern other insects. Both avenues were examined in the research.'

As part of the study involving 2,654 heterogeneous respondents spread over seven treatments, people were asked about their intention to eat insects in various forms. Four options concerned eating insects yourself: general, freeze-dried, fried or processed into a product. Consumers were also asked about beef hamburgers made from the meat of cows that had been fed insects*, and ‘normal’ hamburgers, as a comparison.

The test divided emotions into two categories: positive (happy, proud, satisfied) and negative (angry, guilty, sad). Disgust was also a possible reaction. While it was expected people would be more open to products with processed insects, Verain found few differences between the four insect-based products. 'The emotions were almost the same for the different products. Even if the insects have been processed into a different product, people still have the same emotions as with whole insects. It was striking that people were no more willing to eat processed insects than they were whole ones.'

The disgust associated with eating insects was greater than with eating hamburgers, even if these are hamburgers from cows that have eaten insects. People who have not yet eaten insects experienced more negative emotions and disgust. However, there were some positive views, in that eating insects is healthy, sustainable and natural, and that it would result in a healthy weight. Despite that, people saw insects as less safe than beef.

How do you convince consumers?

Verain believes you don’t necessarily have to replace beef with insects, since seaweed, beans, or other foodstuffs present viable alternatives. 'These are more familiar products. There's still a long way to go as far as insect consumption is concerned. I would think eating insects is certainly an option for cattle feed in the short term. In the long term, invisibly processing insects into products instead of using whole, visible ones seems the best step toward getting people into insects.'

People should also feel confident to use and prepare insects, if that’s what they want. 'A lot of people often don’t know where insects can be bought. They’re no longer only available in health food shops, but also in supermarkets. Once you know where you can get them, you then still have to know what you can do with them.'

Of the participants in the study, 15% had tried insects once, and another 35% were open to it. Verain continues, 'That means half of people are willing to try insects. Social standards are significant when it comes to people's intention, and eating insects clearly has a cultural aspect. What do people around you think you should be doing?'

Standards change over time. 'Look at smoking and peer pressure. Starting to smoke used to be cool, but now things have changed, albeit gradually. It called for a range of measures, coupled with laws and regulations from the government. It will take some time for insects, too. We can explore different avenues in the meantime, such as insects as cattle feed and eating beans and seaweed. While not everyone in the Netherlands has to start eating insects, it’s good if it’s one of the options, so that people start varying their diet more.'

This article appeared previously in VMT

*hypothetically; not yet regulated