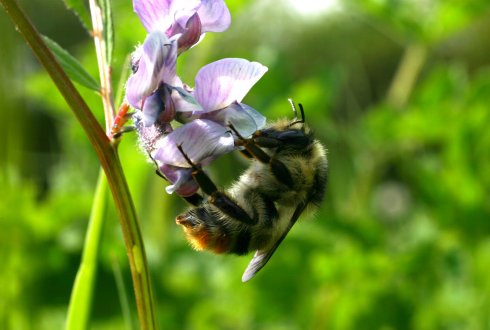 Protecting the habitats of wildlife such as meadow birds is a moral obligation that must be taken on by a rich country like the Netherlands. Otherwise, birds that have made their home here for millions of years will die out. And it isn't because these species are incapable of adaptation. A more important reason is the increasingly rapid homogenization of their habitat. In conservation, the support of nature users is indispensable. These statements are made by Professor David Kleijn in his inaugural speech as professor of Plant Ecology and Nature Management at Wageningen University on 7 April.

Archaeological excavations show that the typical Dutch meadow bird, the black-tailed godwit, was already an inhabitant of the expansive marshlands in our region when the first humans settled here. Large areas of the marshy land consisted of shallow depressions filled with water and slight elevations of peat, like we still see in Estonia where black-tailed godwits can be found nesting in this type of habitat.

In our country, the moorlands were opened up and the peat was extracted until the original landscape was converted into flowering pastures and meadows. The black-tailed godwit managed to adapt perfectly to this new environment thanks to an increased food supply. In recent decades, however, the landscape is changing far too quickly for the birds to adapt. 'The conclusion is that it's not the changes themselves that are causing problems for our national bird, but the rate of change,' says Professor Kleijn. Species like the European hamster, the indigenous freshwater crayfish and the shrill carder bee are facing a similar fate.

A growing group of people object to the idea of individual species conservation, claiming that nature can take care of itself if given the room to do so and if we focus on minimising the negative effects of fragmentation and the disturbances caused by traffic. Planting flowers along the edges of fields, for example, would help ecosystems on and around agricultural land to flourish. 'I don't see this working,' says Professor Kleijn of this government-subsidised intervention. 'It can't work in a country as densely populated as the Netherlands because here the natural dynamics are severely restricted. The influence of the major rivers is limited to narrow band around rivers. But perhaps even more important is our tendency to create the same landscape and the same habitats everywhere we go, including in nature areas. This results in the same species occurring everywhere and the extinction of others. If we don't address the issue, the problem will get worse and more species will end up on the Red List.'

Improving biodiversity is an important issue in the Netherlands. Aside from the moral benefits, we shouldn't underestimate the economic benefits. Professor Kleijn and his colleagues previously demonstrated that at least 785 species of bees pollinate our crops so they can set seed and bear fruit. Thanks to this, wild bees contribute more than $3,000 per hectare to the incomes of farmers and growers.

'The proposed plans for the recently implemented regulation on agricultural nature management were fine,' says Professor Kleijn in his speech entitled, 'Conserving nature in a world of change'. Among other things, this involved focusing on promising areas, raising the groundwater level – which is good for meadow birds – and improving maintenance in the buffer zones around natural areas. 'But these ambitions became watered down when the responsibilities for nature management shifted from the national government to the provincial governments,' explains Professor Kleijn. 'It's unlikely that this new policy will protect the biodiversity of our countryside against further decline.

Nature doesn't care if species become extinct. We do. That's why we care so much about nature conservation,' he adds. 'And that's also why the results of ecological research should focus on the different users: recreational users, farmers and managers. Because without their support, no ecological solution will be effective.'