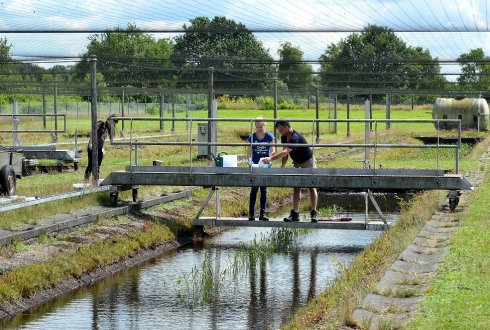 Whether or not nano-plastics and micro-plastics are harmful to nature is unknown. However, Wageningen researchers have shown that tiny particles may affect biodiversity. After being exposed to both realistic and high concentrations of microplastics and nanoplastics for fifteen months, the number of small organisms inhabiting the bottom of ditches and puddles appears to decrease when exposed to high concentrations, while the mixing ratio in species changes. The researchers published their findings in the 31 January edition of Science Advances magazine.

Microplastic particles vary in size between 0.001-5 mm. Nanoplastic particles are even smaller. Laboratory research has demonstrated that plastic particles of this size may affect organisms at the bottom of ditches, puddles and lakes. These are inhabited by a large variety of worms, water fleas and snails in micro-ecosystems. These organisms churn the sediment, filter out substances, introduce new products into the water, eat and are eaten. Thus, they are crucial to higher animals such as amphibians and fish.

So far, studies of the effect of microplastics and nanoplastics have been carried out with short term exposure to unrealistically high concentrations (e.g. 1000 times the normal concentration). And, although a variety of organisms were exposed, this was always just one species per study. Under such circumstances, organisms easily perish in the plastic-infested environment, and news reports on this effect have dominated the news channels for the past six months. “But conditions in nature are completely different from those in a lab,” states Professor Bart Koelemans. “The key question is what happens in nature. That is what we have now studied under ecologically realistic circumstances.”

In a remarkably lengthy and thorough field experiment, PhD student Paula Redondo-Hasselerharm studied the sensitivity of complex living communities. Redondo: “In the lab, organisms are held in tanks and are unable to escape the plastics. Under natural circumstances, they can, and water temperatures and currents are constantly changing. For this reason, we buried plastic particles in natural sediment, but only in certain places. Thus, we were able to see if the biodiversity in these areas differed from the surrounding areas. Instead of studying the effects for just four weeks, we studied them for far longer. After three months, we did not observe any changes yet, but after fifteen months, we saw a decline of approximately 50% in the total number of organisms exposed to both microplastics and macroplastics in comparison to the control system.”

Speculation on the effects of plastics

There is a real need for ecologically relevant research on nanoplastics and microplastics in the current scientific literature. The SAPEA-report that was released a year ago advised the European Commission on policies concerning plastics in our environment confirms this. Among the recommendations were a need for diligent communication on the uncertainties and relevance of research results, as well as a need for relevant exposure scenarios.

“There is much uncertainty, and thus much speculation, on the damage caused by microplastics to nature and human health,” states Bart Koelemans, research leader. “In this research, we have opened up a new path and can show, for the first time, that it is possible to determine realistic links between dosage and effect on living communities in nature. In this sense, nature is kind, as all manner of other factors and variations conceal the effects of plastics. We now have dosage-effect concentration values that we know to be relevant now or in the future.”

Lead image: the ditch where the microplastics and macroplastic research was carried out.