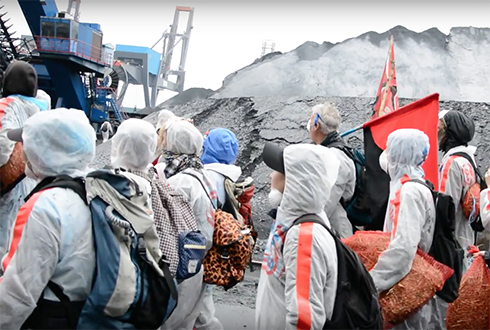 Environment, the theme of our time

Last June was the start for the environmental activists of 'Code Rood'. They came into action for the first time with what they call a massive civil disobedience action. Last summer, in the battle against fossil energy, they occupied the coal port of Amsterdam with over 300 people. This meant that all work had to be stopped all day long. Last year, only dozens of people entered the coal storage last year to take action, but there were more than 300 this year.

Climate activist Chihiro Geuzebroek says, you can see this growth all over the world. She has been an activist for eight years and often participates in major actions abroad. This also applies to our eastern neighbours. A few years ago, you saw that only a few hundred people came to Germany on the major actions of the Ende Gelände environmental group. Since 2015, this number has suddenly increased from 500 to 1500 people and in 2016 there were already more than 4 thousand people in the campaign. I think that with the climate summit in Bonn, there will be more people, too, and that is very encouraging.

Thomas Keulemans has been actively committed to the environment since this year. In addition to his study philosophy, he goes to all meetings of the Red Code and assists in devising plans for the upcoming actions. I have been doing this only now for a year now, because I came across the right people at an environmental conference in Utrecht. Then I knew it right. I had to join in with a hard action,"He was also there in Bonn in November.

Being an environmental activist is popular

Environmental groups are shooting up like mushrooms, says anthropologist Elisabet Rasch. She is a professor of Cultural Anthropology with a specialisation in climate activism. Of course, now it is the case that, if you're going to radicalise a little, nowadays you're the first to get to grips with the environment. But it is certainly true that the environment is really the theme of our time", says Rasch.

According to Ekko of Ierland, Professor of Climate Change at Wageningen University & Research, we can no longer close our eyes and deny the climate problems. That's why it is good that such harsh statements come from environmental activism,' says the climate researcher seriously. Since the first round of negotiations in 1995 of the 23rd annual UN climate conference, global CO2 emissions have increased by more than 60%, while the goal of the climate summit is precisely to reduce emissions'.

Chihiro and Thomas find these figures very worrying. Nevertheless, these hard figures make it easier to shout their voices hoarse in one of the marches or to kick against the political system on one of the major actions. On the other hand, it is also to cry again,"says Thomas.

Many action groups to Bonn

On Saturday 4 November 4th, Code Rood, young socialists of the PvdA, Green Left youngsters of Dwars, youth environment active, Climaxi, students for change and Ende Gelände will organise a major demonstration by Bonn and at the lignite mines in the Rhineland. Chihiro also goes with her to Bonn to make her voice heard. In response to the question of what, in her view, should be the ultimate goal of a climate summit, her answer is brief and clear. We are taking action to halt the fossil industry for a short period of time. A climate summit should also do this, but for good reason. Just stop and close the whole thing so that we can focus on green energy.

Pamela Langenberg (22) made this mini docu for her graduation from the Journalism School. Professor Ekko of Ierland and professor Elisabet Rash were interviewed, among others.
Twitter Whatsapp Linkedin Email
Menu