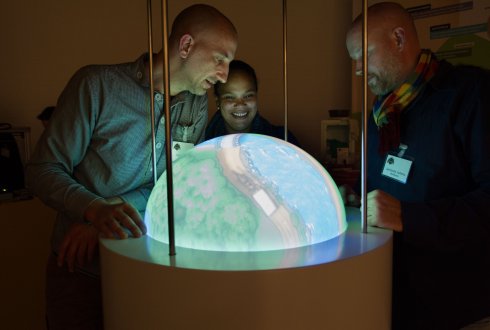 “See this thread? It’s made from maize starch.” Michaëla van Leeuwen, scientist at Applied Plant Research (PPO – part of Wageningen UR), points to a red thread coming from a small 3D printer. The device is one of the eye-catchers in the Bio-Based exhibition which is currently touring the Netherlands.

The goal of the exhibition developed by PPO in partnership with fellow research institute Food & Biobased Research is to showcase to people the various applications of green raw materials. We meet Michaëla in Dronten where the exhibition has been set up in the auditorium of the green College for Applied Research CAH Vilentum.

An intriguing luminous sphere serves as the epicentre of the exhibition, containing an animation telling the story of the biobased economy in just three minutes. Four information panels provide further details. The first panel explains the substances in plants. Counters positioned in front show ears of maize, potatoes and sugar beets plus three materials: hemp, Miscanthus and flax. “Flax can be used to make yarn,” Michaëla explains. “What many people don’t know is that - similar to other vegetable waste products - it can also be used to produce bioplastics.”

Making plastics from plant material requires refinery. The second information panel shows how sugar beets are used to extract first sugar, then lactic acid, and finally polylactic acid (PLA). In front are several semi-manufactured products. Michaëla shows us a jar with pellets that appear to be ordinary plastic pellets. “These are PLA pellets from maize, which will be used by a company in Emmen and a company in IJsselmuiden to produce carpeting.” The next panel shows what else can be made from bioplastics, such as a plastic bottle, a plant pot and a compostable golf tee from potato starch. Made from hemp or flax, even the seatbelts in car seats are green nowadays.

The exhibition is part of the Agro-biopolymer project, a German/Dutch collaborative venture which in turn is part of the INTERREG IVA programme between Germany and the Netherlands. Wageningen UR is one of the financers and is organising the tour of the exhibition through the Netherlands. “We want to explain why the biobased economy is so important,” says Michaëla, while pointing at the final information panel which poses the question ‘What’s going on?’

“In a biobased economy we are no longer dependent on oil. Biobased materials can be composted or, at the very least, recycled. At the same time, this will result in new challenges. For example, how do we ensure that crops and agricultural land are not being used at the expense of global food production? This exhibition aims to tell people this story in a modern and accessible manner.”

The travelling Bio-Based exhibition can be booked in return for the payment of expenses. The exact contents will be determined by Michaëla and her colleagues in collaboration with the client. “The Dronten exhibition focuses on biobased plastics, but there are many other products made from bio-waste too. Soon we will be featuring a custom-made exhibition at a petrol station for alternative fuel in the province of Drenthe, for instance.”

In Dronten it is the 3D printer that is most popular. It is still a curious thought, creating spare keys or Lego blocks from printer threads made of maize or potato. “Within five years, you’ll be doing this yourself,” Michaëla concludes.

The exhibition is financed by the European Regional Development Fund (ERDF), Dutch Ministry of Economic Affairs (EZ), the Province of Drenthe and the Niedersächsische Staatskanzlei. Project management is by Eems Dollard Regio.

In the next two months, the Bio-Based exhibition can be seen on the following dates and locations: