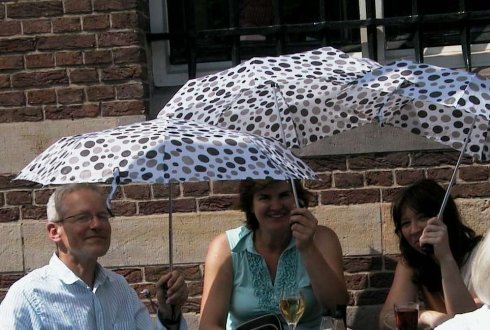 Heat stress is a prominent topic which, according to the Cabinet, deserves serious attention in the decades to come. The State Opening of the Dutch Parliament (Prinsjesdag) will see the publication of the Delta Plan for Spatial Adaptation, a plan that details measures for containing the damage caused by water, heat stress, drought and flooding because of climate change. In a recent letter to the Dutch House of Representatives on the subject, State Secretary for Infrastructure & the Environment Sharon Dijksma refers to work carried out by ESG, including the Climate Effect Atlas, the Impact project in Zeeland, the UrbanClimAd app, the REALCOOL project and the development of an intricate weather forecast model that will eventually be able to predict heat right down to street level.

Sanda Lenzholzer, who heads many projects including the REALCOOL project, is pleased with the attention that the Cabinet intends to pay to the urban heat stress issue. She thinks it’s long overdue. “It’s over ten years since the subject of urban climate gradually started reappearing on Dutch agendas, after decades of nominal attention,” she says. “As early as the 1970s, research into outdoor temperatures in Utrecht was already showing a clear heat island effect. But it took until 2005, when we conducted research into the microclimate in urban outdoor spaces in the Netherlands, for the topic to be taken seriously. Two years later, it was made part of a research project running at the time called ‘Climate for Space’. The follow-up project ‘Knowledge for Climate’ made the topic one of its priorities and here in Wageningen, we are still researching ‘Climate-proof Cities’. In the meantime, we have built up a good reputation in research into urban climate, and ways of ensuring a better urban climate at the urban planning and design stage.”

Lenzholzer hopes that this letter will persuade the House of Representatives and the new Cabinet to put the topic of urban climate and adaptation higher on the scientific and social agenda. In her letter, Sharon Dijksma certainly cites enough reasons: “Heat stress is behind a growing number of illnesses, hospital admissions and deaths; work performance is dropping and absenteeism is on the rise. This is about the impact of higher temperatures on the health of elderly and frail people, as well as about the increase in air pollution (caused by high ozone levels and summer smog), which is leading to more respiratory conditions. In addition, heat can have a negative impact on agriculture and horticulture, due to poor water quality (algal bloom) and heat stress in animal husbandry.”

“So as you see,” continues Sanda Lenzholzer, “these are all problems that we at the Environmental Sciences Group, and Wageningen University & Research as a whole, are able to tackle with research into cause and effect. And of course, with solutions.”