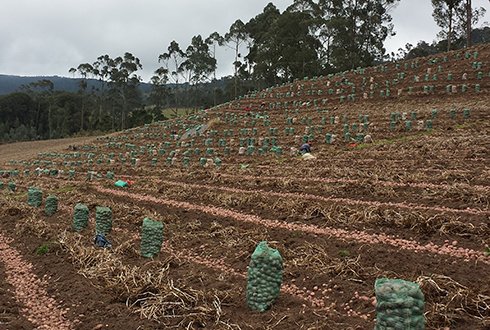 The potato disease phytophthora is responsible for high losses in Latin America. In Europe scientists and industry work together in the so called EuroBlight network to increase the knowledge about phytophthora. Important topics in the network are integrated control, decision support systems, potato varieties and the genetic variation of phytophthora. The information generated in the network is important for scientists ánd for practical recommendations regarding potato varieties and fungicides. An approach which would be of high value in Latin America as well. Initiator, and Wageningen UR researcher, Huub Schepers: “EuroBlight is a novel approach that can be expanded outside Europe. We aim to help scientists and the industry in Latin America to start a network as EuroBlight to increase the knowledge about phytophthora.”

From Europe, to Latin America and the rest of the world

Schepers is ambitious: “With our partners in Europe we collected valuable information that allows potato growers to optimally align their choice in fungicides and resistant varieties with the strains of the pathogen that occur in their region. For the collection and dissemination of the data we developed an approach that can be used in other regions as well. We believe that it is possible to start similar networks in Latin America, North America, Asia and Africa. Last week we made a first step in Latin America. We hope that other regions will follow. Schepers: “The ultimate objective of linking phytophthora networks worldwide is to make use of each other’s experiences and methods in order to control phytophthora in the best possible way and reduce losses to a minimum.”

During the ALAP conference the booklet “Las señales de la papa” (Potato Signals) was handed over to Marcelo Huarte of INTA. INTA is the research organisation in Argentina that works together with WUR to improve the knowledge on potato growing. This Spanish booklet, with practical information about potato growing, will help students and farmers in Argentina to get more knowledge to increase the yields in an efficient way. The booklet is the result of the Knowledge to Knowledge (K2K) project in Argentina in which one of the objectives is to include practical potato training in the agricultural schools.

EuroBlight is a European network of scientists and other specialists working on potato early and late blight that meet every two years. The network combines two previous networks originating from European Concerted Actions and has 150 members.