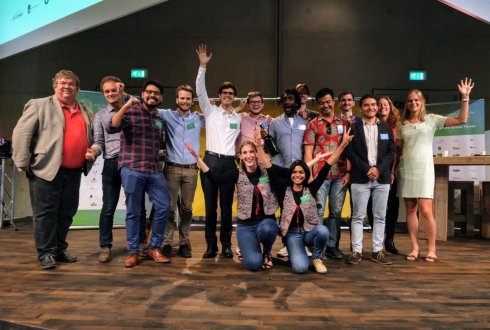 Last Thursday it was time for the Grand Finale of the Rethink Protein Challenge, during which 20 student teams who made it to the finals competed with one another. The 20 finalists of the competition had worked on their ideas or prototypes for months along with business partners. Now it was finally time for the teams to impress the jury, consisting of several business partners, and the audience with their innovative projects focused upon feeding 9 billion people with sustainable, affordable and healthy proteins.

Students in the driver’s seat

The Grand Finale started off with a word of welcome from Arnold Bregt (Dean of Education at Wageningen University & Research), who underlined that during the Rethink Protein Challenge, it were the students themselves who were in the driver’s seat and that they really had to think out of the box. This also became evident during an exciting first round of the Grand Finale, during which all 20 student teams had only one nerve-wracking minute to pitch their idea or prototype on stage.

After this first round of one-minute pitches, Arnold Bregt surprised the finalists by awarding 4 teams with wildcards for the Dutch 4TU Impact Challenge, which will be held November 7th in The Hague. The teams InsectImpact, Alfi, Morama (a lost crop from Africa), and Inka Spread were awarded with the wildcards and will compete with students from all the other Technical Universities in the Netherlands for a ticket for the World Expo in Dubai in 2020.

During the break of the finale, the jury came together to perform the difficult task of selecting 3 teams for both the category Ideation and Prototyping, who could enter the final round of the Grand Finale. At the same time, a busy Innovation Market was organized during which one could meet the business partners and the student teams at their stands. With some live music on the background, visitors could even taste some of the prototypes that the teams brought along.

After the Innovation Market, the Grand Finale continued with a keynote speech from David Welch from The Good Food Institute, who covered plant-based and cell-based meat production amongst others. More topics relating to the protein transition were covered during a panel-discussion, in which several partners gave their views on how we will feed the world with proteins in the future.

Following on these interesting insights that were given into the future of proteins, it was time for an exciting moment as the six teams that made it to the final round were announced by the jury. In the category Ideation, SWAP – silkworm as protein, Meprotein, and Dehydrated Cushuro were selected. In the category Prototyping, Fame Gun, Alfi, and GrainGain were the three teams that could enter the final round. These six teams now had the chance to give a longer two-minute pitch right in front of the jury, which posed challenging questions to the teams afterwards.

The jury came together one final time to decide upon the winners of the Rethink Protein Challenge. After some very long minutes for the student teams, the winners were finally announced. In the category Ideation, ‘SWAP – Silkworm as Protein’ became 1st. ‘SWAP’ aims to use the by-product of the silkworm industry (the pupae) as a protein-rich food supplement. In the category Prototyping, ‘GrainGain’ won, who would like to help feed the world's population by applying a drying technique to spent grain, the residue of the beer brewing process. Both teams got awarded a cheque of €5.000,- and will get support to further develop their projects.

With the winners having been announced it was time for celebrations and also some reflections on the Rethink Protein Challenge. The team behind Enakke, who won the Audience Prize (€500,-) during the finals, noted that especially the whole process of brainstorming and coming up with a prototype that is suitable for the market was very valuable. The one-minute pitches during the Grand Finale were quite nerve-wrecking according to Enakke, “but I think we did quite well as the audience appeared to like it”.