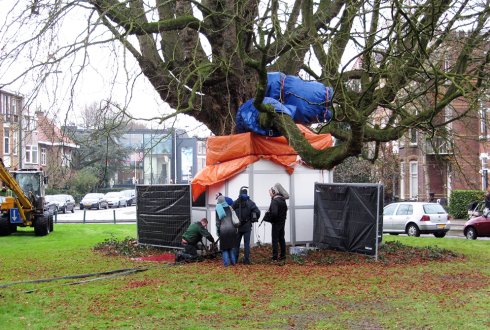 After discovering that the bacterium which causes the much-feared bleeding canker of horse chestnut is sensitive to higher temperatures, scientists from Wageningen University & Research developed a heat treatment method. A company took out a license for the technology for the Dutch market and further developed it into a treatment method that can be applied in practice. The heat treatment offers a realistic option for managing bleeding canker in horse chestnuts.

Bleeding canker of horse chestnut is the most threatening disease for horse chestnuts (Aesculus variety). Highly contagious, it is caused by a bacterium that nestles in the bark cells of the tree which are responsible for the transport of nutrition. This causes the cells to die off and initiates external bleeding of the tree sap. As the bark dies off, the sap flow from the branches to the roots is reduced, which can cause the tree to die.

Various methods and means of managing this disease have been tried since the major break-out of bleeding canker of horse chestnut in the Netherlands in 2005. Until recently, however, these efforts have had unsatisfactory results. In 2011, Wageningen UR scientists discovered in laboratory and greenhouse tests that the bacterium causing bleeding canker of horse chestnut – Pseudomonas syringae pv aesculi – is sensitive to higher temperatures. Placing young chestnuts in a heated greenhouse at a temperature of around circa 39oC for several days resulted in the death of the bacteria, but not the tree. The results were so encouraging that it was decided to perform tests with larger trees outdoors.

Various practical tests have been performed in municipalities throughout the Netherlands since 2013. They involved placing a ‘heat mantle’ around the trunk of adult horse chestnuts which maintains a high temperature for several days. The practical tests showed that the pathogenic bacteria vanished in the part of the trunk that had been treated, helping the tree overcome the damage. Further application will show whether a single treatment is sufficient or whether it is necessary to repeat the treatment over time.

This year Wageningen UR entered into a licensing contract for the Netherlands with Prop Boomtechniek, a Dutch tree care company. Bleeding canker of horse chestnut is also a problem in other countries. There are also licensing opportunities available for foreign companies interested in performing the heat treatment method for diseased horse chestnuts in their own country available.

The development of all treated trees in the Netherlands will be monitored over the coming years. Wageningen UR will continue to be involved in managing the monitoring programme and analyse the results on a regular basis. The goal is to free the tree trunks from the pathogenic bacteria as much as possible so that the tree has the chance to overcome the damage and recover, stimulated by the heat treatment method.

It is currently not known how long the effects of the treatment will last as the bacterium is still present in the environment, for example in or on non-treated parts of the tree. The monitoring programme was set up to answer this question.

'Heat treatment against bleeding canker of horse chestnut: how does it work?' shows the method.