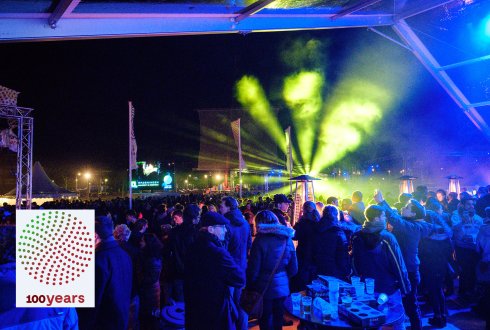 The evening was opened by the Dutch National Student Orchestra (NSO). The NSO, which boasts some of the most musically talented students from across the country, put on an impressive performance at a packed Forum building. Students who were working late that night enjoyed the show from the balcony. The pinnacle of the concert was Petrushka by Igor Stravinsky, after which the musicians brought out the party hats and garlands and led the audience in a rousing rendition of 'Happy Birthday'. This was met with thunderous applause and kicked off the second half of the evening.

The visitors were treated to mulled wine and hot chocolate at The Wisdom & Wonder Pavilion. The roasted marshmallows were delicious and the free drinks enhanced the sense of joy and wonder among the revellers, as groups of students and staff warmed themselves near the fire pits. DJ Robert Feelgood got the crowd dancing and visitors were lined up outside the Pavilion to catch a glimpse of BigBand Sound of Science.

Rector Magnificus Arthor Mol addressed the crowd just before midnight. Aptly dressed in an anniversary sweater, he took to the DJ stage and delivered a speech praising WUR. He then led the crowd in a countdown to midnight and the final element of the evening: a laser show. The spectacular show was met with enthusiastic applause from the students and staff and was captured by thousands of smartphones. Laser beams shot across the crowd and illuminated a huge banner with the words and images of the anniversary theme: LIFE, FOOD and EARTH.

After the laser show, a final round of drinks was poured and the Wisdom & Wonder Pavilion was left with the traces of a successful opening party in celebration of 100 years of WUR.

Impression of the kick-off

Visit Resource for the photoseries: