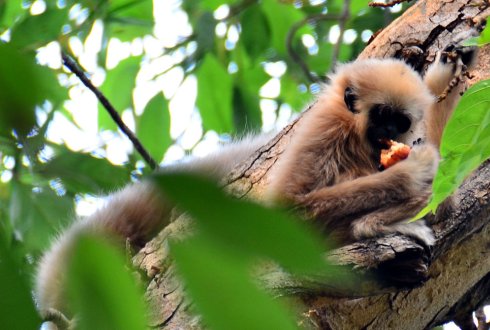 Strange as it may seem, hunting in tropical forests not only endangers the indigenous fauna but the trees as well. When animals that disseminate seeds are hunted the chance that the trees will survive is reduced tenfold. These are the findings of a study by researchers from the Netherlands, the USA, and Thailand that were published today in Proceedings of the Royal Society (Biological Sciences).

For a long time the elephant was a national symbol in Thailand. At the start of the twentieth century 100,000 elephants still roamed the Thai forests. Now there are barely 2,000 left. The decimation of the elephant population in Thailand is largely the result of hunting – or poaching to be more precise. The same applies to tigers, monkeys, and civet cats. The pressure of population growth has turned hunting into a huge problem in South-East Asia.

‘It is not only the survival of animals that is threatened but tree species as well,’ says Pieter Zuidema of Wageningen University. ‘The seeds of tropical trees are spread by mammals and birds. If they die out or if their numbers are drastically reduced, the seeds will no longer be scattered and will land instead at the foot of the trees. Seedlings that grow close together have less chance of survival and grow less strongly. The same goes for trees. So hunting and poaching are directly lowering the survival chances of tree populations. We have quantified the consequences for the first time.’

The research team from the University of Florida, Wageningen University, and the Thai forestry department carried out field studies in a protected area of forest where more than 10,000 seeds, seedlings, and trees were measured and monitored. ‘There is no hunting here,’ says Pieter Zuidema. ‘The fauna was therefore intact and included all the seed disseminators for the trees we were studying.’ Using sophisticated simulation models the researchers calculated the probability of extinction for the main tree species in this area (Miliusa horsfieldii), with and without seed dissemination. And what did they find? Pieter Zuidema explains: ‘The probability of extinction without seed dissemination was ten times higher than with seed dissemination. So hunting animals can dramatically lower the survival prospects of tropical tree species.’