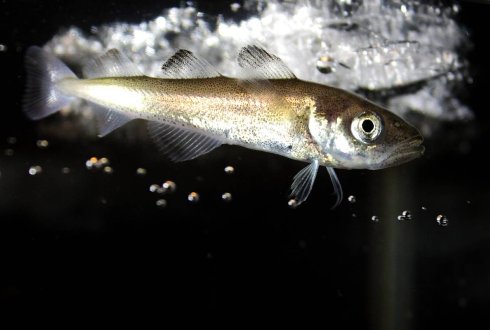 The Arctic Ocean is often considered an undisturbed and pristine environment. Unfortunately, the Arctic isn’t an enclosed system but influenced by humans, as nowadays climate change and pollution play major roles. During the last few years, an additional gyre has been indicated in the vicinity of the Svalbard archipelago, accumulating marine plastic debris from southern, more urbanized areas. Plastic particles trapped in sea ice can be released as that ice melts, becoming available to organisms living and feeding underneath the sea ice.

One of the organisms is the Polar Cod (Boreogadus saida), a fish species that spends its first few years underneath sea ice. It feeds on small crustaceans and serves as an important prey species for larger animals such as seabirds and marine mammals.

To study the potential relationship between plastic in sea ice and the ingestion of plastic by fish, 72 polar cod stomachs were analysed for the presence of plastic. Out of the 72 fish, 2 individuals (constituting 2.8% of the collected sample) were found with one small plastic item each. This result is comparable to ingestion rates in fish from Norwegian and Canadian waters.

Challenges during the study

Some plastic particles, so-called “microfibers,” originating from for example clothing, are not only ingested by fish but are so light in weight that they can become airborne. A distinction between fibres ingested by fish and airborne contamination of the sample is not possible. During different studies, researchers have dealt with this problem in different ways and with varying outcomes.

Therefore, during the current study, a protocol was implemented to examine the potential for airborne contamination during the stomach analyses. It appears that contamination takes place indeed during each step of the protocol. Therefore, as a measure to avoid overestimates we did not include fibres when quantifying the ingestion of plastic particles by polar cod.

The results show that the impact from plastic pollution has reached the Arctic Ocean and that fish can encounter plastic particles underneath sea ice. The consequences of plastic ingestion remain unclear. Together with other factors such as climate change, increasing shipping, and expanding fisheries, plastic pollution can form an additional stressor to the sensitive Arctic ecosystem.