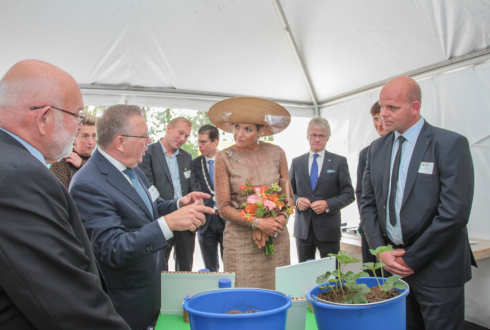 Her Majesty Queen Máxima performed the inauguration of the first mineral plant in the Netherlands this week. The plant recovers minerals from manure and organic residue from food-processing industries. This reduces transport needs and improves the use of nutrients and organic matter by crops. It can also reinforce the reduction of the usage of chemical fertilisers in the region. Researchers of Wageningen Environmental Research have contributed to the development of the digestion process.

The Dutch livestock sector is producing more minerals in the form of manure than can possibly be used on own arable ground. This manure is therefore partly exported from the Netherlands. This entails the vanishing of a large part of organic matter and other valuable components.

The Groene Mineralen Centrale - developed by Groot Zevert Vergisting BV, Wageningen University & Research (WUR) and Nijhuis Industries, with governmental support - processes manure and organic residue in such a way, that the largest part of the phosphate from animal manure is removed, while the other minerals nitrogen and potassium labelled as 'Green Meadow Fertiliser' can be applied in the region. The remaining organic matter can be sold in the region as a soil improver or as a replacement for peat, that is used by the potting soil industry. The so-called Re-O-Eat technology that makes this possible has been developed by researchers of WUR.

Groot Zevert Vergisting BV, the owner of the new installation, receives about 100,000 tonnes of manure and 35,000 tonnes organic residual substances from (farming) companies in the region. Bacteries convert in thirty to forty days  the manure into biogas and digestate, in eight large fermentation units. Around three-quarters of the produced biogas will supply a part of the electricity, used by the nearby factory of dairy producer FrieslandCampina in Borculo. The remaining biogas is transformed into electricity for the Groene Mineralen Centrale, making this energy-neutral. What is left will be supplied to the electricity grid.

Digestate will, after fermentation, be further processed in the plant into an organic soil improver, with a low content of phosphate and nitrogen and a fixed, singular phosphate manure that can serve as raw material to the fertiliser sector. Another (wet) fraction is treated during various processes and filtrations and will eventually result in a liquid fertiliser and clean water. The nitrogen in that manure can replace chemical nitrogen as a fertiliser. The fertiliser is directly applied close to the roots of the crop by specially designed turf-care equipment and can because of this be used for precision techniques. Practical trials from 2018 show that this fertiliser can replace chemical fertilisers.

Phosphate to go to areas lacking it

The Netherlands has, because of the import of fodder, to deal with a phosphate surplus, but many areas elsewhere in the world know deficiencies. By regaining phosphate from animal manure in the Dutch agricultural sector, as a concentrated phosphate product, valuable raw material for fertiliser emerges. Because of this, also the volume of manure that has to be transported is reduced by 90%: so instead of ten vans only one has to be driving. After upgrading into fertiliser granules, phosphate can be delivered to areas with a deficit, of which there are still many in Europe.

Research into circular and sustainable economy

The new plant contributes in this way to agricultural systems where nutrients from waste flows (manure, waste water, organic waste residues) are better utilized. Researchers of WUR are coordinating a large European Research Project called SYSTEMIC, in which, together with industry and other knowledge institutes, a transition to a more circular and sustainable economy can take shape. On five large-scale demonstration locations, among which Groot Zevert Vergisting BV, innovative solutions are actually being implemented. Scientific studies and evaluations will be carried out and published. Subjects are the course and possible improvement of the production process, the business cases and agricultural and environmental aspects.