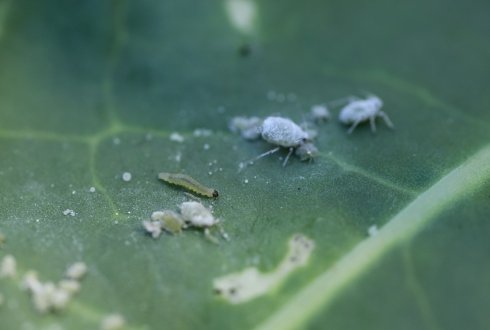 Plants are not solitary, defenceless organisms but rather the centre of a vibrant community consisting of tens or even hundreds of insect species. Plants possess a wide range of defence mechanisms that are activated in response to attack by insects. This change in a plant in turn affects any insects that subsequently arrive on it, but also the natural enemies of herbivorous insects. Because the properties of plants change continuously and because insects react to the changes, an extremely dynamic community develops, on which the plants exert a critical influence. These findings by biologists from the Laboratory of Entomology at Wageningen University were recently published in the leading journal Annual Review of Plant Biology.

Plants recognise different insect attackers, after which plant molecular mechanisms activate various defences within a timescale ranging from minutes to days. Via various routes, plant hormones subsequently induce the production of compounds which repel herbivores. Other defence mechanisms cause the herbivores to be attacked by insectivores that the plant actively attracts by means of the emission of volatiles. These reactions have an effect within hours or several days.

Plants are not, however, attacked by just one insect at a time. Various species of herbivorous insects can attack the plant simultaneously. The plant reaction to combinations of several insect species differs from the reaction to single insects. This is caused by an interaction between the various lines of defence associated with different insect species. The first insects to eat from a plant influence the way a plant defends itself at that moment. This change in the plant repels some insect species while attracting others, and this leads to a shift in the insect community present on the plant. In turn, these insects influence the properties of the plant and thus any new insects that subsequently arrive on it.

A succession of insects can cause molecular changes in a plant within just a few minutes after eating starts, and these changes can influence the composition of the insect community on the plant for a period ranging from several weeks to years. This is what the researchers concluded in their review which involved assembling molecular and ecological information in the literature on plant defence within various timescales. This way of studying the processes involved in an initial insect attack up to the effects on the insect community over several years, provides us with an insight into how the eating of plants by insects develops with time, and how a plant defends itself against those eating insects.