Sustainable agriculture requires a shift from monoculture to intercropping. Under favourable conditions, a smart combination of crops – for example, six rows of wheat alternating with two rows of maize – provides higher yields with less use of artificial fertilisers and pesticides than the same crops in monoculture. These are the findings of doctoral research performed by Fang Gou of the Centre for Crop Systems Analysis at Wageningen University & Research.

For centuries, farmers grew a hodgepodge of crops. In Northwest China, for instance, where the price of labour is relatively lowcheap, this is still the case. However, in Western-style agriculture, mechanisation and the use of fertilisers & pesticides has led to increases in scale and monoculture. “We are now reaching the limits of this approach,” says Wijnand Sukkel, a sustainable agriculture scientist in the Applied Arable and Vegetable Research business unit of Wageningen University & Research. “A monoculture enables the rapid spread of pests and diseases. Moreover, heavy machinery destroys the structure of the soil.”

Looking for a more sustainable solution, Sukkel is conducting experiments in Lelystad with strips of different crop combinations, planted in varying densities. Low labour costs are crucial to this approach. Heavy machinery is expected to eventually give way to a series of robots that look after and harvest crops strip by strip. The research is also looking into which varieties are best suited for intercropping.

“Diseases and pests spread explosively in a monoculture, as there is such an abundance of host plants in the field,” Sukkel explains. “If this uniformity is somehow interrupted, the epidemic slows down. We have seen this with rust in wheat as well as the potato blight (phytophthora). Spiders and beetles play an important role in the control of aphids, but their range is limited. And if you simultaneously harvest and then plough entire hectares, you lose the whole ecosystem.

“In an intercropping system, useful animals can seek refuge in the plants of the other crop while one crop is being harvested, and can then migrate into strips with green manure, so they always have access to shelter. Intercropping makes plants more resilient. For organic farmers, who have a much lower capacity to suppress diseases and pests, this need is particularly pressing. Incidentally, grass and clover are already grown and harvested together for cattle feed. If crops must be harvested separately, things become more difficult.”

Intercropping also has social benefits, for example in terms of landscape and biodiversity. It brings more organic matter into the soil and captures more carbon. Wopke van der Werf, a scientist-lecturer and colleague of Fang Gou at the Centre for Crop Systems Analysis, examines the mechanisms behind the differences between monoculture and intercropping.

“In an intercropping of wheat and maize, it is mainly the wheat yield which rises significantly,” he explains. “If you sow spring wheat in March and maize in May, especially the border rows of wheat can develop exuberantly while the maize plants are still small. Wheat plants also develop a larger root system, which picks up more water and nutrients from the ground. And while the maize plants are initially in the shadow of the wheat, once that has been harvested they catch up both above and underground, especially if we have a nice sunny autumn. Intercropping systems utilise the growing season better, leading to improved sustainability of agriculture.” 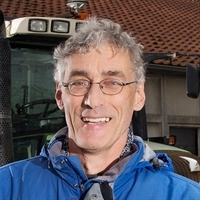