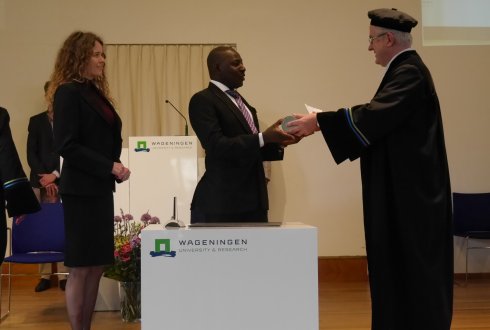 This is the title of the PhD thesis which dr. Amos Ochieng successfully defended yesterday at the Aula in Wageningen. His dissertation is one of the first attempts to incorporate the issue of sport hunting in Uganda into international academic debates on hunting, development and conservation. It analysed two sport hunting policy arrangements in Uganda.

Hunting in post-independent Uganda (as well as Kenya and Botswana) targeted mainly big game such as rhinoceros, buffalo and elephant during European expeditions. Coupled with hunting by the local people, wildlife species across Africa were threatened with extinction. Sport hunting was banned in order to avert further negative ecological impacts. Subsequently, sport hunting was allowed under the influence of shifting conservation discourses. National parks were created in Uganda, as well as elsewhere in Africa and managed under a protectionist 'fortress conservation' model. Under this, the local population were labelled 'poachers' and were liable to harsh punishments. Consequently, many rural Africans, especially those living next to the new protected areas, became vulnerable to animal attacks and crop damage. The protectionist model later came under criticism, and the authorities decided that it was better to view neighbouring communities as 'partners' in conservation as opposed to viewig them as 'enemies' of conservation. With this, an alternative participatory approach was adopted in the implementation of state policies in Africa, in particularly in Uganda.