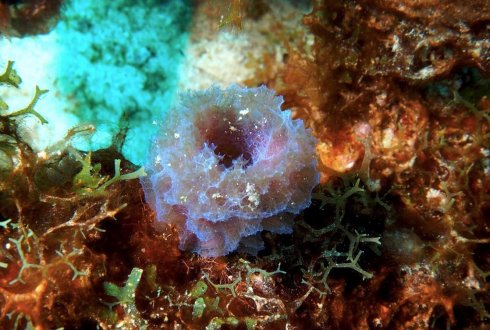 The coral reefs of Curaçao and Bonaire have undergone large-scale ecological degradation since the 1970s. This degradation is mainly caused by population growth on the Caribbean islands and the effects of climate change. These are some of the gloomy conclusions drawn by Didier de Bakker, PhD candidate at Wageningen Marine Research, in his thesis which he defended on 17 April. But it appears that there is still hope for the coral reefs.

For his thesis, De Bakker studied how the coral reefs around Curaçao and Bonaire have changed over the past 40 years. The results show that coral cover has declined substantially at depths between 10 and 40 metres: from an average of 32.6% in the 1970s to only 9.2% in 2013.

Coral has been replaced at an alarming rate by opportunistic organisms such as algae and cyanobacterial mats that are thriving under the changing environmental conditions. This was widely known about algae, but De Bakker’s description of the rise and harmfulness of cyanobacterial mats is a major novelty. His research also shows that the reefs have flattened as a result of the decline of large reef-constructing corals. This poses a risk to the rich biodiversity there.

According to De Bakker, population growth on the islands is one of the main causes of the degradation of coral reefs. The total population of the Caribbean has more than doubled since the 1950s, and this has had ecological consequences.

Human activity has led to reduced water quality, especially in coastal areas, where most coral reefs can be found. Pathogens thrive under these worsening conditions and have almost exterminated important organisms such as sea urchins (Diadema antillarum) and several large calcifying species (Acropora spp). Overfishing and the introduction of invasive species have aggravated these problems. Moreover, as a consequence of these local anthropogenic factors, coral reefs are less resilient to global threats like climate change.

In his thesis, De Bakker warns that the degradation of coral reefs in the Caribbean is on the verge of entering an alarming phase. Nonetheless, he still has hope that things can be turned around: "The presented data also confirms the ‘survival’ of near-pristine reefs when local conditions are favourable." Reducing local human impact is therefore of the highest importance. This can be achieved by improving waste water treatment facilities and the sewage system, strict supervision of coastal development and replanting mangrove trees. "We as humans have the power to initiate change, but we need to act now and improve conditions on a global scale, but certainly on a local scale as well."