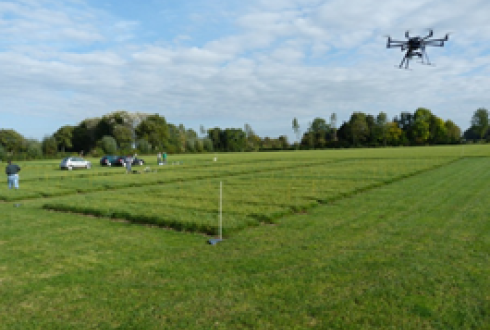 Plant-soil feedback (PSF) describes the interactions between plants and soil biota. Positive feedback can enhance the performance of succeeding summer crops after the right winter cover crops have been grown. However, these plant-soil interactions are complex and species-specific. Until now PSF field studies were time-consuming due to the destructive measurements which constrain the scale at which these studies can be performed.

A recent paper by Rik Nuijten, Lammert Kooistra and Gerlinde de Deyn shows that high-resolution images acquired using Unmanned Aerial Vehicles (UAV) in combination with object-based image analysis (OBIA) can be adopted to analyse and evaluate the PSF effects of six winter crops on the productivity of succeeding endive (Cichorium endivia) summer crop by estimating crop volume. A three-dimensional surface and terrain model were photogrammetrically reconstructed from UAV imagery, acquired on 1 July 2015 in Wageningen, the Netherlands. Multi-resolution image segmentation (MIRS) and template matching algorithms were used in an integrated workflow to detect individual crops (accuracy = 99.8%) and delineate C. endivia crop covered area (accuracy = 85.4%). Mean crop area (R = 0.61) and crop volume (R = 0.71) estimates had strong positive correlations with in situ measured dry biomass. Productivity differences resulting from the WCC treatments were greater for estimated crop volume in comparison to in situ biomass, the legacy of Raphanus was most beneficial for estimated crop volume. The perennial ryegrass L. perenne treatment resulted in a significantly lower production of C. endivia. The developed workflow has potential for PSF studies as well as precision farming due to its flexibility and scalability. These findings provide insight into the potential of UAV for determining PSF effects on crop productivity for a large scale.

The opportunities of high-resolution UAV remote sensing for PSF studies will be further evaluated as part of a project funded by the Foodshot Global ‘GroundBreaker Prize’ which was awarded to Gerlinde de Deyn in June 2019.