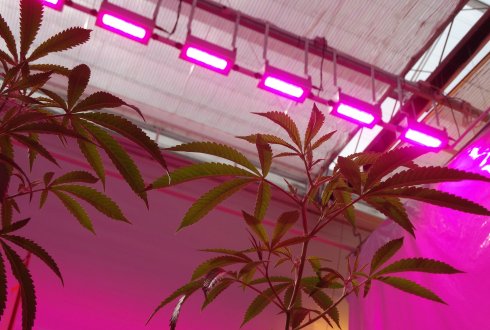 Medicinal cannabis can be grown well in greenhouses under LED lighting. Some varieties of cannabis plants grown under LED lighting may even produce more medicinally active substances than if they had been grown under lighting that is just as intensive using SON-T lamps. This was confirmed by a study conducted by Wageningen University & Research Centre. The study also revealed that medicinal cannabis can be grown well under high lighting levels. The study was commissioned by Lemnis Oreon, a developer and producer of LED lighting concepts and PB Techniek, a supplier that caters to the international horticulture sector.

Experts in greenhouse technology at Wageningen University & Research Centre conducted a study in the spring of 2016 into the influence of cultivation conditions on the growth and yield of medicinal cannabis. The study measured, among other aspects, the quantities of Cannabidiol (CBD) and Tetrahydrocannabinol (THC) produced. Cannabidiol (CBD) is used in the Netherlands to treat such diseases as Multiple Sclerosis. THC is used to combat and alleviate medical conditions such as Tourette syndrome or therapy-resistant glaucoma, and such complaints as weight loss, nausea and vomiting. The demand for medicinal cannabis is increasing strongly all over the world, while the demand for safe, reliable and efficient production methods is growing concurrently. With this study, Wageningen University & Research aims to contribute its stone’s worth to the knowledge needed to achieve this.

The modern, high-tech systems and expertise used in the Dutch greenhouse horticulture industry will enable safe and efficient production methods to be realised for crops such as medicinal cannabis. The study has investigated the cultivation conditions under which medicinal cannabis plants thrive best, with special attention paid to LED lighting. Because not enough information is currently available about the cultivation of medicinal cannabis in greenhouses, the researchers at Wageningen UR also investigated other factors that influence cultivation, such as temperature, moisture and plant nutrients, as well as the incidence of pests and diseases.

The study made use of two light sources: SON-T and water-cooled LED units. The crops grown under LED lighting were exposed to two intensities of light: one that was equal to the SON-T lighting, and one that was considerably higher. Normally speaking, greenhouses only make use of assimilation lighting during those periods of the year when there is less natural light available. Because the study was launched in spring and early summer (from 6 April - 21 June), an autumn situation was simulated by making use of black-out cloth that would allow no more than 100 µmol s-1 cm-2 of light to enter the greenhouse.

All plants were given a long day (in terms of light) for a period of four weeks, after which they were exposed to shorter daylight hours until harvesting. The plants grew profusely. This resulted in dense foliage. However, thrips were discovered in the plants, which were kept in check using biological crop protection agents. Humidity was high in the densely foliated plants; this led to the development of fungus (Sclerotinia). Once again, no chemical agents were used to combat this.

Photosynthesis measurements were made during the growth process. Additionally, the plants’ length and weight (both fresh and dried) were measured during the harvest. Specimens were taken of the various treatment methods, of which an analysis was made with regard to THC and CBD content after drying by a specialised laboratory.

This led to the following conclusions:

*Content is indexed; the SON-T 250 µmol treatment per cultivar has been set to 100.

The parties commissioning the research