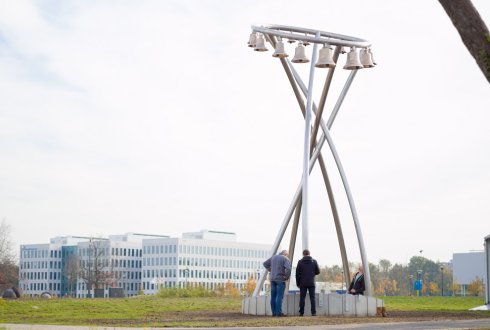 Ingrid van Engelshoven, minister of Education, Culture and Science, will officially close our anniversary year on 9 November. With the push of a button, the carillon on campus will be inaugurated by the minister and Arthur Mol, Rector Magnificus.

The carillon is a gift from the University Fund Wageningen (UFW), Wageningen ambassadors, and several donors. “We wanted to give a present that contributes to the atmosphere and rithym of research and education on campus”, Jan Karel Mak, president of the UFW, explains. The carillion is and own design by the UFW and consists out of 18 bells on top of a metal frame. “The shape of the frame, a constricted open cone, has two symbolic meanings”, Mak explains. “On the one hand it connects heaven (climate) and earth (fertile soil), on the other hand it symbolizes the process of scientific research: from broad information collection at the base, through analytic reduction to outreaching outcomes.”

The inspiration for giving a carillon comes according to Mak from the USA, where it is quite common to have a bell tower on campus. The carillon however will not be playing every hour like a bell tower does. Instead, it can be heard 12 times a year, on special occacions like the Dies Natalis, Opening Academic year and AID.

The first sounds of the carillon will be heard across campus around 17.45