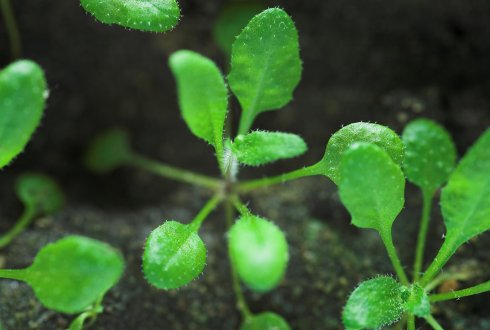 The plant hormone auxin seems to work wonders for plant growth. The development of roots and the vascular system, the growth of plants towards light; there are hardly any growth processes that do not need this hormone. For a long time it was a mystery as to how this chemically simple molecule managed all that. In the prestigious journal Cell of 30 January the research group of Professor Dolf Weijers at Wageningen University describes how molecular switches shaped like a caliper make sure unique hormonal reactions take place in various parts of the plant. This new knowledge could help control processes like root formation more effectively.

The hormone auxin switches a large number of genes on and off. Special proteins, the Auxin Response Factors (ARF), bind to DNA and are essential for this switching process. There are 23 different ARF proteins. Dolf Weijers’ group at the Laboratory of Biochemistry of Wageningen University has shown that the proteins cause various genes in thale cress (Arabidopsis), the plant used in their research, to respond. Furthermore, each of the ARF proteins has its own effect.

Together with Barcelona-based structural biologists Roeland Boer and Miquel Coll, the Wageningen team has clarified the 3-D structure of the ARF proteins on a molecular scale. It appeared that these proteins do not connect to DNA on their own, but in pairs. A pair attaches to DNA more strongly than a single ARF protein, so it was expected that if there were multiple binding points for ARF proteins on a gene, the controlling effect of the auxin would be strong there.

The key question the researchers wanted to answer in this study was how the ARF proteins differ from each other and how, in that case, the 23 ARF proteins recognise other genes. It was thought that the part of the ARF proteins that recognised DNA differed in some way and that that was the reason different parts were bound. After determining the recognition points of a number of ARF proteins, the researchers made a surprising discovery: the ARF proteins all recognised the same piece of six DNA bases. “That was a big disappointment!” Dolf Weijers said. “We thought we were close to explaining why the ARFs differ in their DNA-binding properties. But it seems we were wrong.”

The team put this to the test by comparing the structures of two ARF proteins. The difference in structure arose more than 400 million years ago yet the DNA contact points have remained unchanged all that time.

The crucial question remained: how does DNA binding differ among ARF proteins? “We realised that the formation of ARF protein pairs added a new dimension to the DNA binding question. Two ARF-recognition points were bound instead of one. You have to imagine a caliper with its two points touching the DNA,” Professor Weijers explained. In the 1990s it was already known that two ARF-recognition points close to each other on a gene led to auxin strongly activating that gene. “We thought the distance between the two recognition points might play a role in how exactly the ARF pair achieved that recognition.”

This study means a big step forwards in understanding why some genes are controlled by auxin and others are not. It also means there is a clear working hypothesis for how the ARF proteins differ. “The next challenge is to prove this pair-of-compasses mechanism operates in the plant too”, the biochemist said. In earlier research, Weijers’ team showed that the 23 ARFs in Arabidopsis occurred in various places in the plant. “We’d now like to check if this model can explain why ARF proteins switch on different genes in roots and flowers.”

Not only plants use auxin for the control of growth and development. In agriculture, fruit-growing and crop reproduction, auxin is often deployed as a growth regulator, rooting hormone or as a herbicide. Having a detailed knowledge of how auxins switch on genes allows us to fine-tune the activities of auxins in plants. An example: at the moment auxins can be used to stimulate root formation, but growers have to accept that other growth effects can also occur. Another point is that the reaction to auxin is not the same in all plants, so root stimulation does not always work well. Knowing how ARFs recognise genes should help to select ARF types with one or other limited specificity in order to ensure that a particular reaction to auxin occurs.

The research is being financed by NWO Chemical Sciences.