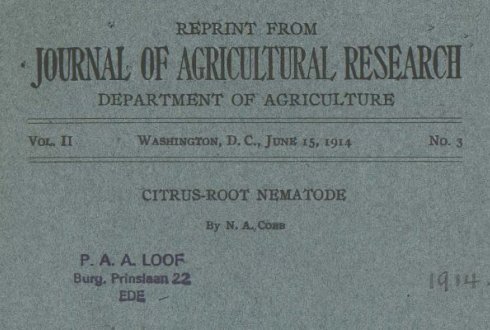 Drs. P.A.A. (Piet) Loof has been active as an eminent nematode taxonomist at the Laboratory for Nematology of Wageningen University from 1955 onwards. After his formal retirement in 1988, he continued working in our lab for more than two decades, but around 2008 drs. Piet Loof finalized his active career.  As a part of his heritage, our lab maintains a nematode taxonomy and systematics literature collection. These are numerous boxes with reprints and hard copies, and the possibilities for interested outsiders to explore this collection were limited.

To make this literature collection accessible and searchable, the Lab of Nematology decided in close cooperation with Wageningen UR library to digitalize scientific literature from before 1996 (from this year onwards most publishers digitalized their journals). Currently, 3,333 articles have been made online accessible and searchable: a wealth of information on nematode taxonomy and systematics!

Though not finished, we felt this digitalization process was in a stage that it deserved to go life, and from now onwards it can be accessed via http://library.wur.nl/WebQuery/loof?q=*