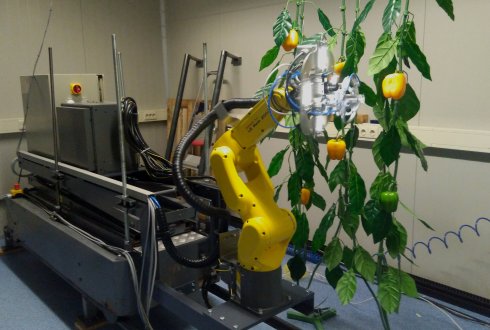 The international project team that works on the development of the sweet pepper harvesting robot Sweeper has entered its second year of research. Recently, the by Wageningen UR Greenhouse Horticulture coordinated team discussed the latest progress: Sweeper is ready for testing in a commercial greenhouse!

First model Sweeper in use

After testing and selection of individual modules, the first model of the robot was integrated by the Dutch company Irmato (Veghel). Currently it is placed at the laboratory of Wageningen UR Greenhouse Horticulture where it is now used for further testing manipulator control and fruit detection software from Umeå University (Sweden) and Ben Gurion University (Israel). The Proefstation voor de Groenteteelt in Sint-Katelijne-Waver in Belgium has selected the most suitable sweet pepper variety for robotic harvesting and started the second season tests to select the best cultivation technique.

Further experiments in a commercial greenhouse

Very soon the robot will be transferred to a commercial greenhouse (Tuindershoek) at IJsselmuiden the Netherlands for further experiments. Before that, functional tests in the laboratory have to confirm that the robot is able to reliably harvest fruits in an artificial crop. In the meantime the Sweeper project has also established an Exploitation Committee and a Growers Advisory Board to receive valuable feedback from end-users.

This project has received funding from the European Union's Horizon 2020 research and innovation programme under grant agreement No 644313.

Read more about the projects