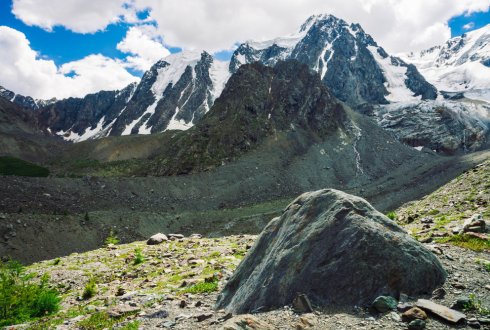 How many years can a mountain exist? Bob Dylan’s rhetoric question has just received yet another scientifically-based answer. Researchers from Wageningen University & Research (WUR) and Denmark’s Technical University (DTU) have developed a new method that can measure the exposure duration of rocks and sediments, leading to new insights in landscape evolution. In Scientific Reports (Nature) of this week they reveal their innovative technique.

The interactions of sunlight with plants and animals is common knowledge that begs no special introduction. However, fewer of us realise that sunlight interacts with rocks too, involving subtle subatomic processes that are generally difficult to observe. In a rock initially shielded from light, the defects within its crystals fill with electric charge over time, as a result of the surrounding environmental and cosmic radiation. When this rock is then exposed to sunlight, some of the trapped charge immediately at the surface will recombine and emit photons, in a process called ‘luminescence’.

As sunlight exposure continues, deeper and deeper regions within the rock will subsequently interact with the incoming sunlight and get similarly emptied of trapped charge. The transition zone between the rock’s surface where no trapped charge exists, and deeper regions where electron traps are fully occupied, is called the ‘luminescence bleaching depth’. This depth can provide geoscientists with vital information regarding the precise timing of landscape formation, bedrock erosion rates, sediment transport distances, sky cover conditions, and so on.

Until recently, the method for determining the ‘luminescence bleaching depth’ was laborious, low-resolution, and indirect (unable to isolate one kind of defect without perturbing many others). A group of researchers based in Wageningen University & Research (WUR), together with researchers at Denmark’s Technical University (DTU), have now succeeded in re-thinking this methodology from scratch, and obtained unprecedented high-resolution 2D maps of trapped electrons within rocks.

The new method is based on a recent discovery by DTU Nutech, which utilizes a very specific wavelength of infrared light (830 nanometers) to stimulate a well-known electron trap in feldspar (the most common mineral within the Earth’s crust). By imaging the natural photoluminescence at slightly longer wavelengths (>925 nanometers), the researchers obtained unprecedented spatial data on the ‘luminescence bleaching depth’ of an ice-polished granite surface from the Swiss Alps. The results not only matched theoretical expectations for a surface continuously exposed to sunlight for 11,000 years, but also offered two additional dimensions (spatial and chemical) for understanding how light interacts with various minerals in prolonged and constant natural settings.

The findings are the result of the long-standing collaboration between the Netherlands Centre for Luminescence dating (NCL), with the Centre for Nuclear Technologies of Denmark’s Technical University (DTU Nutech). “It is unusual to be in the right place and in the right time, to convert an emerging technology into an immediate application in geoscience”, says Dr. Benny Guralnik, who conceived the study and obtained funding through NWO-VENI. “It is further ironic how a couple of ad-lib measurements by my MSc intern, suddenly became the pinnacle of my VENI”, says Guralnik in reference to Elaine Sellwood, who is the first author of the paper, and who since the project’s completion pursues a full PhD programme at DTU Nutech, aimed at improving the prototype instrument, and further developing the method’s geological applications.