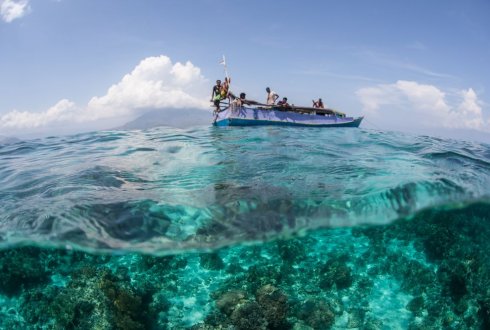 Researchers at Wageningen University & Research (WUR) teamed up with the Bogor Agricultural University to develop a method that will help improve estimations of unreported fish catch. Based on the research results, they estimate that the catch by small- and medium scale fishing vessels fishing from the second largest tuna harbour in Indonesian waters around of North Sulawesi could be 33 to 38 percent higher than reported. This is caused by non- or misreporting of juvenile tuna catch, the use of catch as bait and for consumption at home or on board.

The team identified and quantified sources of uncertainty in the catch and effort reports of tuna fisheries in Indonesia, where underestimation of catch and effort remains a big problem despite earlier improvements. With financial support from WUR’s BESTTuna-program they studied small- and medium-scale tuna fisheries in the oceanic fishing port Bitung, the biggest tuna producer in Eastern Indonesia situated in the province of North Sulawesi. According to the researchers, their method to quantify unreported catch and upscale survey results to the level of the port can contribute to the plan of The Indonesian Ministry of Marine Affairs and Fisheries (MMAF) to implement a fishing quota. They suggest that the MMAF should consider the type and scale of fisheries in documenting unreported catch.

Estimations were based on literature research, expert interviews, a field survey among 40 small- and medium scale fishers in OFP Bitung, and a database analysis of logbook and permit issuance data provided by the fishing port authorities. Four categories of uncertainty were distinguished: unreported catch of juvenile tuna, on-board consumption, catch used as bait, and catch taken home for consumption. These categories were studied per type of fishery. The researchers then estimated the magnitude of these four categories and extrapolated the results to the level of the harbour.

The results show that the purse-seine fishery has the largest total unreported catch per trip, followed by the longline, pole-and-line and handline fisheries. Unreported catch of juvenile tuna is the largest source of uncertainty in total catch estimates for all types of fishery. For example, in the purse seine fishery this catch is estimated at 3100 to 3400 kg per trip. Consumption on board is the highest in longline fishery, due to the relatively long fishing trips. The amount of unreported catch taken home for consumption is highest among pole-and-line fishers.

Underestimation of fish catch is a global problem. Between 1980 and 2003 the total losses were estimated at 11 to 26 million tonnes per year. Lack of clarity on numbers of fish catch causes uncertainty in estimates of fishing mortality, stock size, and impact of fishery on the ecosystem. Improvement in monitoring and registration is needed to protect tuna fisheries.