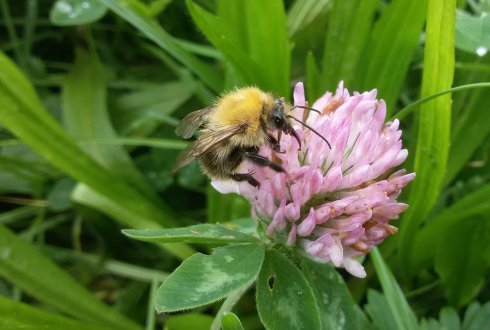 Wild bees and hoverflies play a vital role in pollinating food crops and wild plants. Hundreds of pollinator species occur in the Netherlands, but they declined significantly in numbers as well as species diversity in recent years. In a new report by Wageningen Environmental Research, together with EIS Knowledge Centre Insect, Naturalis Biodiversity Center and Ecologica, the occurrence of wild bees and hoverflies has been mapped for various types of landscape. Land owners who want to stimulate wild bees and hoverflies can use this information to determine on which target species they should focus.

The report gives an overview of the types of landscapes preferred by the various species of wild pollinators. This information can be used to determine if a certain type of landscape meets the requirements of a certain species well, or where this actually could be promoted. For example by offering food plants to feed on and more nesting opportunities. Based on this report, land owners who want to stimulate pollinators have the opportunity to set befitting aims and take effective measures.

The group of threatened species in the Netherlands is much larger than the dominant crop pollinators. Over half of the wild bee species and one third of the hoverflies are labelled as threatened. Threatened species occur in various numbers and in nearly any type of landscape. The greatest diversity can be found in the hilly landscape of Limburg and in river areas. It is striking that in urban areas there is also an abundance of threatened wild bees and hoverflies, while the agricultural areas score the lowest in the occurrence of threatened species. It also became apparent that it is the same limited set of species that occurs almost everywhere in rural areas: generalists that put relatively few demands on their living environment.

The report is part of the programme ‘Kennisimpuls Bestuivers’, financed by the Dutch Ministry of LNV. This programme aims to develop and share knowledge, that will contribute to the conservation and advancement of (wild) pollinators, in such a way that these will be able to fulfil their important role in food production and in natural ecosystems. The Kennisimpuls connects with the Nationale Bijenstrategie in which the Ministry of LNV and a large number of societal partners collaborate on initiatives to conserve and promote pollinators.

Read the full report (in Dutch)

Do you have a question about pollinators? Ask our experts: dr. WA (Wim) Ozinga
Contact form + Show more (1)