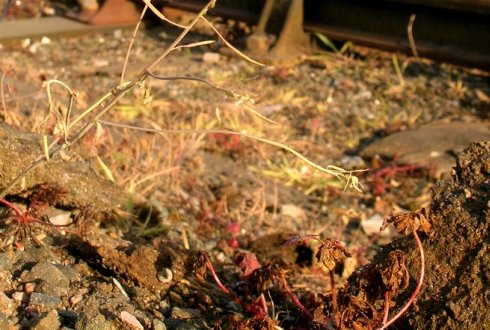 Researchers Pádraic Flood, Joost van Heerwaarden, Jeremy Harbinson and Mark Aarts have shown that one single type of thale cress (Arabidopsis thaliana) spread across the railway network of south-eastern and central England with barely any genetic variation, thereby drastically modifying the genetic make-up of other local thale cress populations for the long term. The plant was able to do this thanks to one mutation in the DNA of chloroplasts that ensures the plant's resistance to atrazine, an herbicide that was used frequently until the beginning of the 1990s. The journal Current Biology published a scientific article on this subject this week.

PhD candidate Pádraic Flood's interest in photosynthesis led to this unique discovery. In earlier research, he read about a type of thale cress which had developed a resistance to atrazine. However, this development had a negative impact on their photosynthesis, the process by which plants use sunlight to convert water and carbon dioxide into oxygen and sugars. The thale cress concerned was gathered for the first time in 1988 at the railway station in Ely, a small city close to Cambridge in the UK. The train stopped in Ely as Pádraic was heading to a conference in Norwich. Pádraic remembered what he had read about the 'Ely' thale cress, and got off the train to collect seeds from the several plants he found at the station. Once back in Wageningen, he sowed these and investigated whether the mutation that caused the resistance against atrazine was still present. He discovered that more than half of the plants still had this mutation – a very peculiar discovery, given that UK railways stopped using atrazine in 1992.

This produced new questions, including how it was possible that this mutation was still present twenty years after atrazine had stopped being used and whether this type of thale cress is found in places other than Ely.

Various trips to the UK were planned in order to solve this question. The researchers gathered seeds of plants around the stations and railways in various locations in England as well as of plants growing far away from a railway. However, the search area extended beyond Ely, taking the researchers to Cornwall and Herefordshire, where plants were also found with the same mutation that causes atrazine resistance.

An analysis of these plants produced an interesting picture. Firstly, atrazine-resistant plants only occur in the area around railways and not outside this environment. Secondly, while the plants are present in large numbers around Ely, they also occur sporadically in the south-west of England. Finally, all plants share the same genetic make-up. The final feature is especially interesting, considering that thale cress is usually very diverse in terms of genetics. The researchers therefore came to the conclusion that the railway companies' use of atrazine over the years has caused the large-scale spread of one specific type of thale cress across the UK by means of the railways.

This human intervention has led to a deterioration in the local biodiversity of thale cress, even despite the fact that atrazine has not been used for at least twenty years in controlling weeds on UK railways. Furthermore, in spite of the fact that atrazine-resistant plants are less efficient in utilising sunlight to create sugars to grow, these plants still occur in great numbers in some places. An important scientific conclusion is that strong selection for a mutation in the DNA in the chloroplast has meant that the whole genome, i.e. all genetic traits, of a thale cress are passed on almost unchanged to seeds. Up until now, this has hardly ever been considered before in evolution theory.