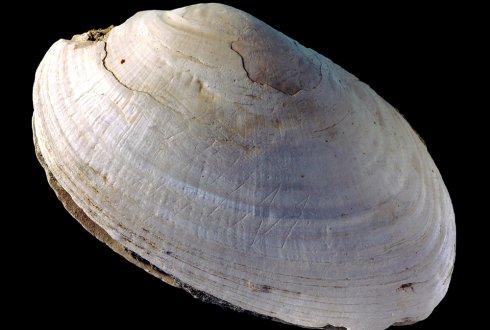 Our Homo erectus ancestors on Java around half a million years ago used freshwater mussels in a surprising way. They ate the shellfish, used the shells to fabricate tools and also made intriguing engravings on the shells. This discovery throws new light on the evolution of human behaviour. “It had been assumed that creating these types of engravings was something only modern man (Homo sapiens) in Africa could do – from about 100,000 years ago”, said lead author José Joordens from Leiden University.

Jakob Wallinga from Wageningen University and Jan Wijbrans from VU University Amsterdam did the dating. Wallinga and his team employed a luminescence technique to determine the age of sand. “Because the shells had been lying at Naturalis we couldn’t look at the age of the layer of sediment they were found in,” Wallinga explained. “That is why we did the dating by means of grains of sand still inside the shells. Luminescence dating enables us to determine when the sand grains were last exposed to light. We measure a tiny light signal that the grains can broadcast; this luminescence signal is reduced to zero by daylight. Once buried, natural radioactivity causes the luminescence to build up gradually. The sand was so old that the luminescence signals were at saturation level, which meant it was not possible to date the grains precisely. However, it was possible to conclude that the sand in the shells, and also thus the engravings on one of the shells, must be at least 430,000 years old.”

VU University subsequently performed research into when the grains of sand could have been formed. Originating from a volcanic area, they ended up in rivers. Using the Argon-Argon technique it was possible to determine that the youngest grains must have been formed some 540,000 years ago. “This provides us with a ‘window’ of age between 430,000 and 540,000 years,” Jakob Wallinga says. “In other words, hundreds of thousands of years older than the earliest engravings found so far.”

In total, 21 researchers have examined the hundreds of museum-held fossil shells. The engraving is a geometrical pattern only visible with low-angle lighting. The research, as well as ruling out any possibility of the pattern being caused by animals or natural weathering, has delivered the proof that the zigzag pattern was the work of Homo erectus. The function of the engravings remains a mystery, however.