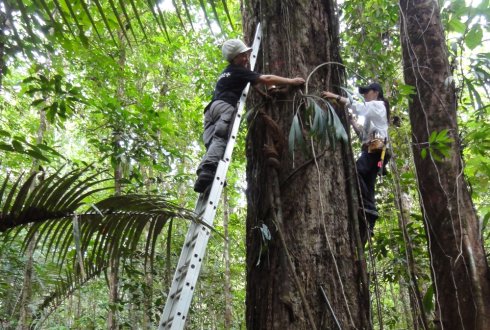 Amazon rain forests are the world’s most extensive and are extraordinarily diverse, being home to an estimated 16,000 tree species. Yet a new study has discovered that fewer than 200 species of these, barely one percent, are responsible for half of all tree growth and carbon stored in the Amazon.

Foto: Measuring the size of large trees often requires a ladder in order to reach over buttresses. (Credit: Maxime Réjou-Méchain)

The study is carried out by a large network of researchers, amongst which researchers from Wageningen UR, Naturalis Biodiversity Center, and Tropenbos International, and published in Nature Communications. It shows that the most abundant species do not necessarily store or process the most carbon. Using a vast dataset of over 500 forest plots and 200,000 trees made up of 3,600 named species, the researchers were able to compare the abundance, biomass stock and woody growth of each species.

Marielos Peña-Claros from Wageningen UR says: “Certain species are already recognized as being especially abundant in the Amazon, but it was unknown whether these actually dominate the forest carbon cycle. We found that while species that are very common often do store a lot of biomass, others store or grow much more than their abundance suggests.”

One such critical species is Bertholletia excelsa, also known for producing Brazil nuts. Less than one in a thousand Amazon trees is a Brazil nut, but it ranks the third most important species in terms of carbon storage and fourth in growth.

Species that are able to reach a large size tend to dominate disproportionately, while much of the diversity in the Amazon is made up of small tree species that live in the forest understory.  “Whilst there is less diversity amongst the larger species, they contribute more to certain ecosystem services,” Hans ter Steege of Naturalis says.

Trees produce sugars from CO2, sunlight, and water through the process of photosynthesis, and some of these are eventually stored as wood. “The Amazon forest helps us out by storing billions of tonnes of carbon that would otherwise remain in the atmosphere contributing to the greenhouse effect,” Rene Boot of Tropenbos declares.

In such a large and diverse ecosystem as the Amazon, understanding the carbon cycle is a huge challenge. The finding that just a tiny fraction of species are responsible for half of the biomass could help scientists to predict how the rainforests will fare in a changing climate. Overlooking the other 99% of species diversity in the Amazon could be dangerous though. Lourens Poorter, co-author of the study cautions: “Our team has worked out which plants ‘matter’ most right now. But, as the Amazon climate continues to change, we may expect a very different set of trees coming to the fore, including some barely noticed now.”

Rainfor unites hundreds of scientists dedicated to monitoring Amazon ecosystems from the ground-up. The network is centred on permanent forest plots that track the lives of individual trees and species. The network emphasises careful, long-term, on-the-ground research to assess the behaviour of the world’s most active carbon exchange system, and to understand the impact of Amazonia on the global climate.  RAINFOR also fosters the development of young scientists and field technicians, working closely with partners across the nations of Amazonia to help develop new generations of Amazon ecologists. The work of RAINFOR is currently supported by funding agencies in Brazil, Colombia, Peru, Venezuela, the UK (NERC), and the EU (European Research Council). A full list of the 57 participating organisations from 15 countries is available at the Rainfor website.

At 6 million km2, the Amazon forest covers an area 25 times as great as the United Kingdom (or 15 times the size of California), and spans nine countries, or which by far the largest is Brazil.  Large parts of Bolivia, Ecuador, Colombia, Peru, Venezuela, French Guyana, Guyana, and Suriname are also still covered by Amazon forests.  This region contains one fifth of all species on Earth, including more than 15,000 tree species. Its three hundred billion trees store one fifth of all carbon in the Earth’s biomass. The Amazon is also home to several million people, and water vapour from Amazonia nurtures agriculture further south, including the biofuel crops which power Brazil’s cars. Each year Amazon forests cycle 18 billion tons of carbon, more than twice as much carbon as the combined emissions of all fossil fuels burnt in the world. 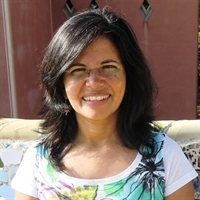