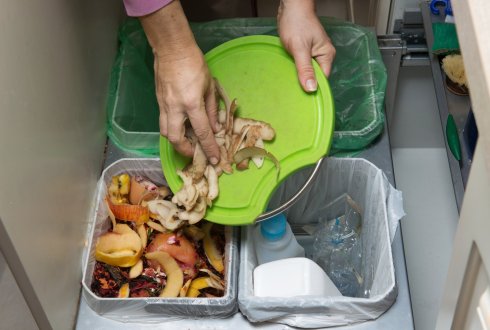 The wind and the sun are the energy resources of the future, even in cities. An electricity buffer is required under extreme circumstances, if the demand for energy is particularly high and the supply is low. Organic kitchen and garden waste from the city to be used for electricity generation can act as this buffer. This was the conclusion drawn by researchers at Wageningen University & Research.

The researchers developed a scientific model that can be used to calculate how cities will generate their electricity in 2050. They used Amsterdam as a case study. How Amsterdam's energy network is likely to develop over the coming decades depends to a great extent on policy factors. The researchers therefore developed two scenarios. In the first scenario, CO2 emissions are drastically reduced thanks to the closure of coal-fired power stations and the construction of wind turbines. The second scenario assumes a maximum capacity of solar and wind power.

The study shows that organic kitchen and garden waste has potential as a buffer for wind and solar power. In the CAP scenario, in which the CO2 emissions are restricted, the Amsterdam of 2050 would require around 2,800 tonnes of organic kitchen and garden waste per day as a reserve energy resource under the most extreme conditions. In the RES scenario, in which additional renewable energy is used, only 1,300 tonnes of reserve capacity would be required as the solar and wind power complement each other. The researchers calculated that Amsterdam will produce around 1,400 tonnes of organic kitchen and garden waste per day in 2050. This would mean that the city could be mainly self-sufficient in terms of electricity by the middle of this century and could better accommodate fluctuations in electricity supply. To achieve this, however, the city would need to devote itself fully to a combination of wind power and solar power along with electricity produced from biomass, and a part from other sources.

Organic kitchen and garden waste from a city can therefore play an important role in tomorrow's electricity provision for that city. This is in keeping with Amsterdam's aim to switch entirely to renewable energy in the long term. Initiatives focusing on this are brought together at the AMS Institute, the Amsterdam Institute for Metropolitan Solutions, of which Wageningen University & Research is a partner. Other major cities can also use the model as an instrument in order to make the transition from fossil fuels to renewable energy.