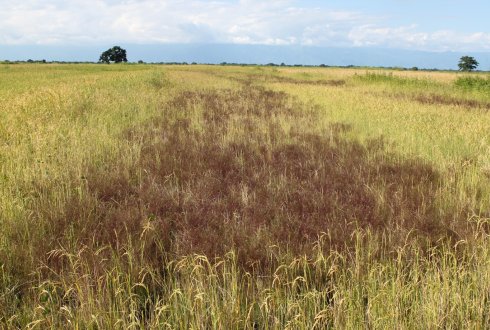 Parasitic plants – plants that penetrate another plant and grow at its expense – have caused some $200 million worth of damage to the African rice harvest this year, at the cost of 15 million meals a day. If no effective measures are developed and implemented against these parasites, the damage will increase over the coming years by some $30 million a year. This has been revealed by a team of researchers representing the research institutions AfricaRice, the International Rice Research Institute and Wageningen University & Research.

Parasitic plants are often deceptively beautiful, but they threaten food crops such as sorghum, maize and rice, and particularly in the poorer parts of the world. For African farmers, these plants are true monsters; they suck almost all the nutrients out of their hosts, so that the yields of key crops are reduced by as much as 70%, and the harvests produce too little to provide the farmers with an adequate income. In some cases, there is not even enough to feed their families.

Over the past years, rice has become an increasingly important food crop in Africa. The main reason for this is that rice is easier and quicker to prepare than sorghum, for example. In Africa, as in the rest of the world, more and more people are being drawn to the big cities. These people often change their diets to relatively ‘fast’ food, such as rice

As rice has grown in importance as a food crop, the problems with parasitic plants have also multiplied rapidly. Due to the large demand, the farmers – often women – grow rice on land where it has not been previously grown. This is often poor land that is occasionally inundated and where the seeds of parasitic plants lie dormant.

‘The situation quickly deteriorates from there,’ explains Lammert Bastiaans, international weed management expert with Wageningen University & Research. ‘Because the parasitic plants flourish in the rice crops, they quickly reproduce and disperse. This exacerbates the problem on soils that have already been invaded by parasitic plants. But that’s not all; the parasitic plants are now spreading to fields where they formerly did not occu

Bastiaans and his colleagues are the first to measure the economic impact of these parasitic plants on Africa’s rice harvest. Thanks to the plant collections in various herbariums, the researchers were able to identify where the parasitic plants occur, how this overlaps with regions with rain-fed rice cultivation and how the weed infestation is developing. They used computer models to translate their findings into economic data.

Their research revealed that some 1,300,000 hectares of rain-fed rice crops have been invaded by parasitic plants. It concerns three varieties of Striga in the highlands, while in the African lowlands it is the species Rhamphicarpa that threatens the rice harvest.

Based on the results of their computer models and the herbarium data, the researchers predict that the damage to the economy will be about $200 million this year. This is equivalent to 500,000 tonnes of rice, or 15 million meals a day. If no measures are taken, the damage will increase by some $30 million per year. To compare, the Netherlands contributes some $100 million per year to the UN’s World Food Programme.