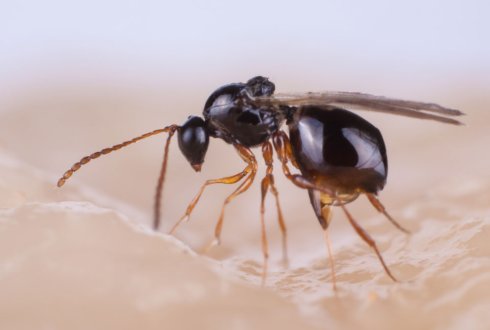 Parasitoids are insects that lay their eggs inside other insects, their ‘hosts’. New research reveals that egg laying parasitoids are able to distinguish between the presence of none, one or two earlier laid competitive parasitoid eggs inside a host.

The parasitoid egg develops into a larva that consumes the interior tissues of its host, often a caterpillar. Eventually the host is killed and a new parasitoid emerges from its skin. A vital decision that a female parasitoid needs to take to select a suitable host, is to avoid possible competition with a parasitoid that may already be present in a host. So-called solitary parasitoid species should only lay one egg in a host, because only one parasitoid can develop per host. This ‘host discrimination’ behaviour of parasitoid wasps has been well studied. But how is a parasitoid able to detect that a host is already parasitized? We and other researchers supposed in the 1970s that they did this with sensory organs on their egg laying organ, the ovipositor, a kind of injection needle. We indeed found minute taste bud-like structures, named coeloconic sensilla, on the very tip of the ovipositor of the parasitoid Leptopilina heterotoma in 1972.

In a collaborative research project between the Polytechnic University of Marche, Ancona (Italy) and Wageningen University (The Netherlands), we stimulated one taste bud with blood of unparasitized, one-time-parasitized and two-times-parasitized Drosophila larvae. We recorded neural signals from cells in the taste bud and showed that these signals that are sent to the insect brain differ depending on the presence of no, one or two parasitoid eggs inside the host.

We demonstrate for the first time that quantitative characteristics of the neural responses to these blood samples differ significantly, implying that host discrimination is encoded by taste receptor neurons in the coeloconic ovipositor sensillum. The activity of three of the six neurons present in the sensillum suffices for host discrimination and this supports the hypothesis that L. heterotoma female wasps employ an ensemble code for parasitization status of the host.

So parasitoids, tiny insects of only 2 mm, with an even tinier brain, can ‘count’ the eggs using sensory coding.

Parasitoids do not only have a fascinating biology, they are also very efficiently used in the control of insect pests on crops, thereby significantly reducing the need to apply pesticides. Every week millions of parasitoids are produced worldwide and released in, for example, vegetable, fruit and flower crops, corn, sugar cane, soybean and citrus.

Caption photograph: The parasitoid Leptopilina heterotoma. The ovipositor is visible as a yellow needle-like structure between the four legs at the left hand side and the two legs at the right hand side. The coeloconic sensillum is located at the very tip of the ovipositor that  has been inserted into the substrate. Courtesy Hans Smid, Laboratory of Entomology, Wageningen University, The Netherlands