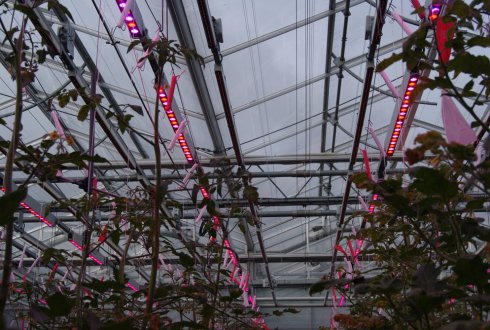 The use of assimilation lighting in greenhouse horticulture has increased considerably over the last decade, both in area as in intensity, leading to an increase in electricity consumption. One of the advantages of LED lighting compared to HPS lighting is the higher efficiency of LEDs. Another advantage is that LEDs emit light with the desired spectral composition (colour).

In the Carbon-LED project, Wageningen University & Research, Philips, Bayer CropScience, INRA and Startlife cooperate in designing energy-efficient production systems for greenhouse horticulture, based on LED lighting. During the winter of 2016/2017, multiple tomato varieties were grown under LED lighting, with and without additional far red light. The addition of far red light led to an increase in production for all varieties, the extent to which depended on the variety.

The additional far red light goes with an increased electricity consumption. The question is therefor to which extent the far red can be deployed to replace part of the red/blue PAR light. This question will be answered during next lighting season (2017/2018). At Wageningen University & Research, business unit Glastuinbouw in Bleiswijk tomato plants varieties “Progression” and “Extension” were planted on 20 October 2017. They will be lighted with either 210 µmol/m2/s red/blue LED light or with 35 µmol/m2/s far red light in combination with 175 µmol/m2/s red/blue light. We will investigate what the consequences of this partial replacement of PAR light by far red light will be for photosynthesis, assimilate partitioning, growth and production.

The results of this trial will be used for further development of the energy-efficient production systems for horticulture based on LED lighting.