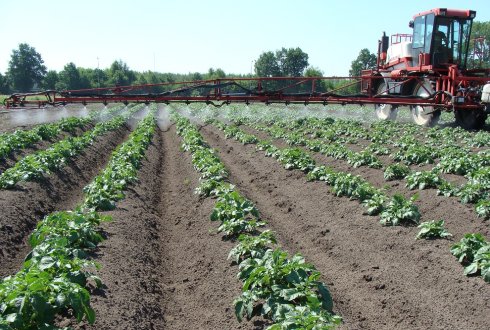 The research team from Wageningen University & Research analyzed 317 European agricultural topsoil samples from different cropping systems including potato fields, wheat, maize, vegetables and vineyards. From the 76 tested compounds (around 20% of EU available pesticides), they found 43 different pesticides residues in soil, some in the original, active form, others as metabolites. 58% of the samples contained multiple pesticide residues, some up to 13 residues, and 25% of the samples contained 1 pesticide residue type. More than 150 different pesticide mixtures were identified in soil.

Glyphosate and its metabolite AMPA, metabolites of DDT – forbidden since decades in Europe -, and the broad-spectrum fungicides boscalid, epoxiconazole and tebuconazole were the compounds most frequently found and at highest concentrations. The maximum total pesticide content in soil was 2.87 milligram per kilogram of soil. “While we found more than one residue in 58% of the soils, one can state that the presence of multiple pesticide residues in the soil environment is apparently the rule rather than the exception”, says Prof. Violette Geissen of the Soil Physics and Land Management group. The toxic effects of of (mixtures of) pesticide residues on the soil organism communities are unknown. “More than half a century of pesticides use without soil monitoring raises questions” says Prof. Geissen. Actual toxicity assessment by the European Authority on Food Safety (EFSA) only includes the effects of single residues on a few number of soil organisms. Integrated effects of the detected pesticide mixtures on soil organisms are unknown, and of particular concern.

Soil contamination by pesticide residues should be an integral aspect in the characterization of overall soil quality, the research team pleads. So far, there is no EU legislation for thresholds or quality standards available for pesticides in soil, single ones or mixtures, endangering crucial soil organisms. Therefore, urgent efforts are needed to test the integrated effects of individual pesticides and pesticide mixtures on a wide spectrum of essential soil organisms, and thereupon define adequate soil protection policies. In this context, current pesticide approval procedures need revision also to account for the accumulated effects of different pesticides on soil organisms.