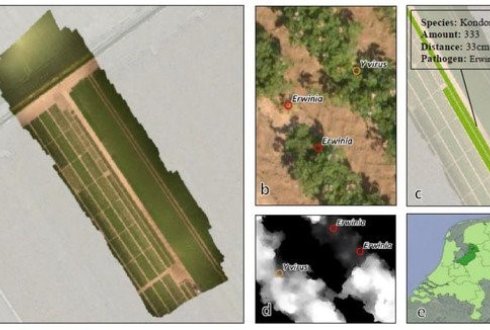 Pests and other pathogens accounting for roughly 40% of pre-harvest loss in potatoes. The WUR project Ziekzoeker is investigating sensor based methods to support the identification of diseases in potatoes in an early stage. Very High Resolution (VHR) imaging from Unmanned Aerial Vehicles (UAV) were one of the technologies investigated. Jasper Siebring and his colleagues developed an approach which uses semantic object classes from a UAV-based VHR image by their morphological features to identify potato plant pathogens. This research was published in the Sensors journal. Find the abstract and the link to the open source paper below.

Abstract
There is a growing demand in both food quality and quantity, but as of now, one-third of all food produced for human consumption is lost due to pests and other pathogens accounting for roughly 40% of pre-harvest loss in potatoes. Pathogens in potato plants, like the Erwinia bacteria and the PVYNTN virus for example, exhibit symptoms of varying severity that are not easily captured by pixel-based classes (as these ignore shape, texture, and context in general). The aim of this research is to develop an object-based image analysis (OBIA) method for trait retrieval of individual potato plants that maximizes information output from Unmanned Aerial Vehicle (UAV) RGB very high resolution (VHR) imagery and its derivatives, to be used for disease detection of the Solanum tuberosum. The approach proposed can be split in two steps: (1) object-based mapping of potato plants using an optimized implementation of large scale mean-shift segmentation (LSMSS), and (2) classification of disease using a random forest (RF) model for a set of morphological traits computed from their associative objects. The approach was proven viable as the associative RF model detected presence of Erwinia and PVY pathogens with a maximum F1 score of 0.75 and an average Matthews Correlation Coefficient (MCC) score of 0.47. It also shows that low-altitude imagery acquired with a commercial UAV is a viable off-the-shelf tool for precision farming, and potato pathogen detection.