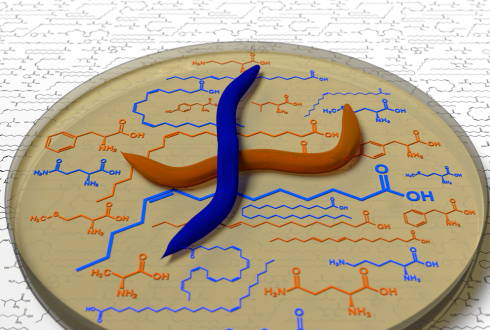 Metabolic homeostasis is a complex process that is essential for an organism’s health. In our paper in Genome Research, we identify the contribution of genetic factors controlling metabolism in the model nematode Caenorhabditis elegans. This paper build on the expertise of the Laboratory of Nematology on quantitative genetics in C. elegans and the Houtkooper group at the Amsterdam UMC on high-throughput metabolomics.

This study systematically investigated the genetic basis of metabolism by quantitative trait locus (QTL) mapping, a technique that allows identification of genomic regions harbouring genetic variation involved in affecting a trait. For example, we found a strong association between the genotype on the right arm of Chromosome I and the fatty acid C14:1. We followed-up on this particular association, first by using a panel of inbred strains to prove the association exists. As a QTL only identifies a genomic region, and not a gene per-se, we were also curious as to which gene(s) might be involved. To test this, we used an approach based on RNA interference, where gene expression was lowered by feeding the nematodes double-stranded RNA, which leads to breakdown of the messenger RNA of the targeted gene. Thereby, we found five candidate regulators for the C14:1 QTL.

This paper lies the foundation for studying complex metabolic traits in the nematode C. elegans by using a QTL approach. It shows that the metabolome is subjected to complex genetic regulation. It also opens the possibility to study mechanisms underlying this complex regulation and the effect of the environment. For example, the effect of dietary alterations and stresses associated with metabolic changes.