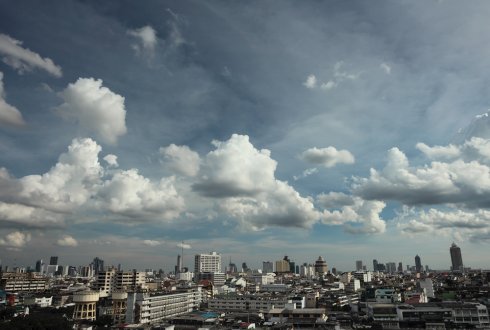 Natalie Theeuwes of the Meteorology and Air Quality Group has been awarded a Rubicon grant for her research into the effect of cities on cloud formation. She will use this grant to investigate the processes that lead to cloud formation over cities. This research will take place at the University of Reading in England.

More than 54 percent of the world's population now lives in urban areas, where interactions take place between the built environment, the inhabitants and the weather. Clouds and precipitation have a powerful effect on life in the city. “However, until now little research has been conducted into the processes that affect the formation of clouds over urban areas,” explains Theeuwes. There are documented examples of situations in which urban development promoted the formation of clouds, but also situations in which cloud formation was suppressed. My research therefore focuses on the factors affecting cloud formation over cities. In particular, I want to answer the question of whether relatively more or relatively less cloud formation occurs over urban areas.”

The Rubicon programme of the Netherlands Organisation for Scientific Research (NWO) is intended to provide promising post-doctorate researchers with international research experience. Gaining research experience abroad is seen as an important step in the careers of young scientists. A total of 22 Rubicon grants were awarded in this round of the programme. There were 100 applications.